The Netherlands benefits from a strong European Union (EU). Given the changing international relations, it is therefore important that the EU bolsters its position, including its trade position, by continuing to conclude regional trade agreements, further integrating the single market and curbing public scepticism about free trade. This emerges from a study that De Nederlandsche Bank (DNB) published today.

Mutual relations in the global economy are constantly shifting. Amid shifts in global power bases, protectionism has gained ground in recent years. Today's DNB Occasional Study shows that these changes are bad news for the Dutch economy – around 40% of the value added generated by exports from the Netherlands is vulnerable to trade-restrictive measures.

Free trade scepticism on the rise

The DNB Occasional Study identifies three drivers underlying emerging protectionism. Firstly, global power bases have shifted and come under pressure. Secondly, the World Trade Organization (WTO), which aims to promote free trade, has failed to bring its agenda into line with the changes that shape today's global economy. This makes the WTO less effective in preventing and combating protectionism. Finally, scepticism towards free trade has increased. In many developed countries, including EU Member States, a growing number of people believe that, while free trade is beneficial for their country as a whole, it does not improve their individual well-being.

In economic trade theory, any losses incurred in free trade, such as job losses or wage decreases, are recognised, but mainly considered to be transient issues. Theoretically, if someone loses their job in a struggling import sector, that person simply moves to a job in a thriving export sector. Reality has shown, however, that people are much less willing to move to another town or city or switch to a different sector than is assumed in theory. Moreover, as global value chains emerge, countries increasingly specialise in specific tasks, rather than in particular sectors. As a result, those losing out to free trade face higher adjustment costs, as transitioning into a different sector involves higher costs than moving to another profession in the same sector.

Emerging protectionism is bad news for the Netherlands

Emerging protectionism threatens the open Dutch economy. In 2018, 34% of Dutch GDP was generated by goods and services exports. A significant portion of these exports are of a regional nature – 51% of Dutch value added in exports has destinations in the EU along international value chains. In addition, the EU has concluded comprehensive trade agreements with a number of countries. As a result, around 60% of the total Dutch exported value added is not exposed to protectionism to any significant extent. This is because partners in a trade agreement and EU Member States are not allowed, in principle, to impose any barriers to mutual trade. With respect to the remaining part (40%) of its exported value added, however, the Netherlands is vulnerable to trade-restrictive measures.

The Netherlands is particularly exposed to protectionism from the United States.  More than 10% of Dutch value added in exports crosses the US border at some point, whereas a mere 5.2% has China as its destination. Dutch services sectors, such as other business services and wholesale and retail trade, are particularly vulnerable to US protectionism (see Figure 1). In part, this is due to the fact that services are used in the production and distribution of exported goods. Furthermore, the services sectors still face remaining barriers to trade within the European single market. Roughly 80% of European service providers say they feel hampered by discrepancies  in services legislation between EU Member States.

Figure 1 - Exports via and to the United States, by sector 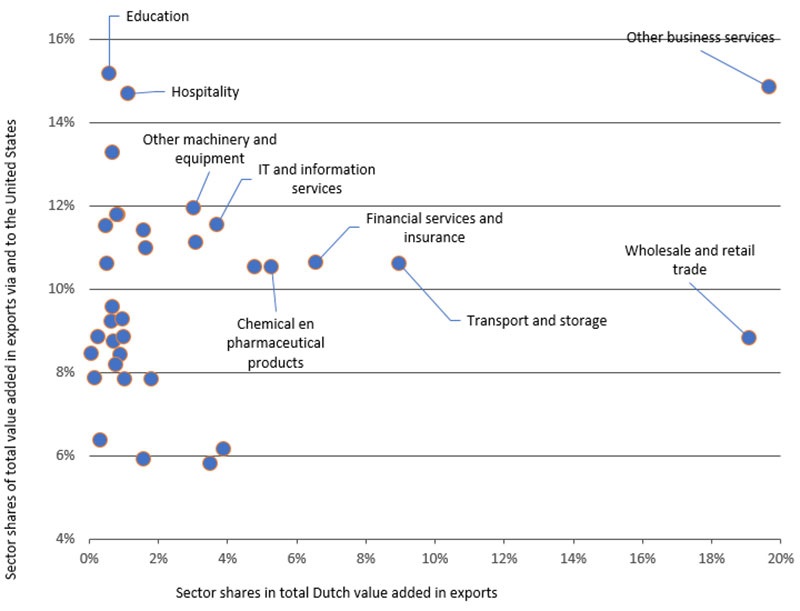 The challenges posed by protectionism are too big for the Netherlands to face on its own, and they call for a robust EU. In a world with shifting power bases, a strong, deeply integrated EU can wield its influence more effectively on the world stage. It is therefore in the Netherlands’ best interest that the EU bolsters its position, including its trade position, by continuing to conclude regional trade agreements. Of particular importance is a transatlantic trade agreement with the United States. The Netherlands would also benefit from deeper integration of the European single market, most notably for  services in the area of trade. Lastly, and crucially for the Netherlands, the EU must combat protectionism by addressing free trade scepticism within its own borders and actively push for WTO reform. Read more in the DNB Occasional Study published today (English version forthcoming).