Financially literate people are more likely to trust their bank, insurance firm and pension fund compared with people lacking financial knowledge. This has emerged from DNB research based on 14 years of data on Dutch consumer trust levels.

While trust in the financial sector is generally on the rise, it has not returned to pre-crisis levels

Public trust in financial institutions is an important precondition for the functioning of the financial system, which in turn is essential for the development of the real economy. In other words, the economy as a whole depends on trust in financial institutions. Dutch consumers show a fair level of trust in banks, insurers and pension funds in general, even though these levels are structurally lower compared with those observed before the financial crisis (see Figure 1). For example, 67% of the more than 2,500 consumers we surveyed said they mostly or fully trusted the banking sector in 2019, against 89% in 2006. We conducted an in-depth study into the factors underlying levels of consumer trust. 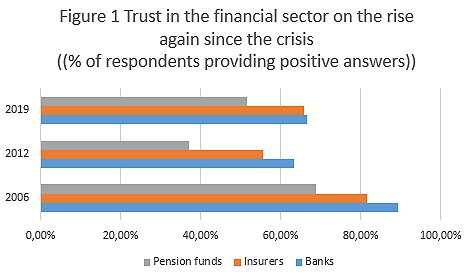 Financial knowledge plays a role in various forms of trust

The results of a survey over the 2006-2019 period show that there is a positive relationship between consumers’ level of trust and their level of financial knowledge. Financial literacy plays an important role in various forms of trust. For example, it plays a role in consumers’ expectations of their own bank, life insurer or pension fund being able to deliver on its promises. It is also relevant to consumers’ trust in the banking, insurance and pension sectors in general. Last but not least, it is one of the key factors for trust in the expertise and integrity of financial sector managers.

The positive relationship between financial knowledge and trust also holds when alternative indicators for financial literacy are used, such as being in charge of household finances or working in the financial sector.

The relationship between financial literacy and trust is a relatively new subject of research. The importance of financial literacy in general has been studied more extensively. The general consensus is that financially literate people make better financial decisions compared with less financially literate people. The literature shows that they are able to negotiate more favourable interest rates and the spread of their investment portfolios is more balanced.

The study into the factors determining consumer levels of trust also shows that the relations with personal characteristics depend on the type of trust that is measured. For example, compared with women, men are more likely to trust that their own bank, life insurer or pension fund is able to deliver on its promises and can meet its financial obligations. On the other hand, their trust in the expertise and integrity of financial sector managers is lower compared with women. Age seems to have a positive impact on the level of trust where the pension sector is concerned. In other words: Dutch consumers’ trust in pension funds generally rises with age. The opposite is true for the banking and insurance sectors, where trust declines with age.