Between 2014 and 2018, gross wage growth lagged behind contractual wage growth in spite of an economic upswing and a tightening labour market. One of the causes is the influx of young employees and flex workers during that period. This emerged from a joint study conducted by De Nederlandsche Bank (DNB) and CPB Netherlands Bureau for Economic Policy Analysis (CPB). A further likely cause is the fact that individual remuneration components, such as additional wage increases, bonuses and promotion-related pay rises, were lower than before.

Changes in the composition of employment at the macro level are reflected in wage drift. This is typically a countercyclical effect, as mostly lower paid employees (young people, flex workers and lower educated workers) lose their jobs in a recession, while more expensive employees remain in employment. As the proportion of low-paid workers falls, the average wage level goes up. This results in a positive contribution of the composition effect to wage growth and wage drift. 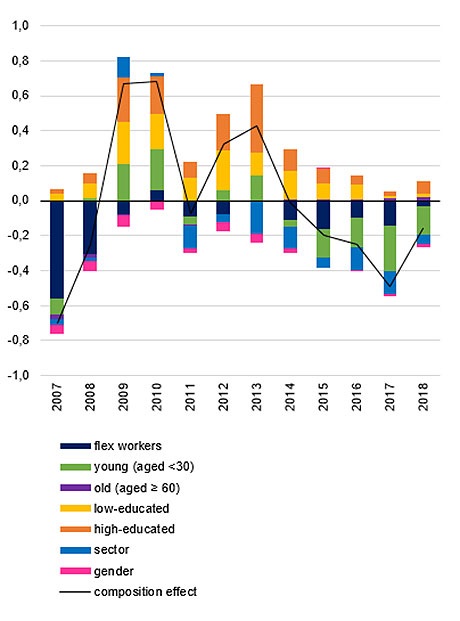 Composition effects only tell part of the story. In fact, between 2014 and 2018 total wage growth was an estimated -0.2 to -0.3 percentage points a year, whereas total wage drift over the same period averaged -0.5 percentage points in this period. This implies that incidental remuneration at the individual level also contributed negatively to wage drift. This is surprising, as earlier periods of labour market tightening (1996-2001 and 2005-2008) saw positive wage drift overall. This is a strong indicator that, in recent years, individual wage increases, promotion-related pay rises and bonuses were lower or not as common as in the past.

Our June 2020 issue of the Economic Developments and Outlook foresees a deep recession due to the COVID-19 pandemic. Gross domestic product (GDP) in the Netherlands is projected to fall by 6.4% in 2020. Unemployment is set to climb to 7.3% in 2021. The crisis also depresses wage developments. Whereas contractual wage growth for 2020 is already largely fixed and is expected to reach 2.3%, our projections put it at 1.0% in 2021. The loss of jobs is expected to result in a positive composition effect, as young low-paid flex workers will be the first to lose their jobs. In addition, our projections assume that employers will try to dampen their wage costs by granting less individual incidental remuneration. The latter effect is dominant in the projections, resulting in estimated negative wage growth on balance, in both 2020 and 2021.

For more detailed results in Dutch, see the article published today on the ESB website and the background document on the CPB website.