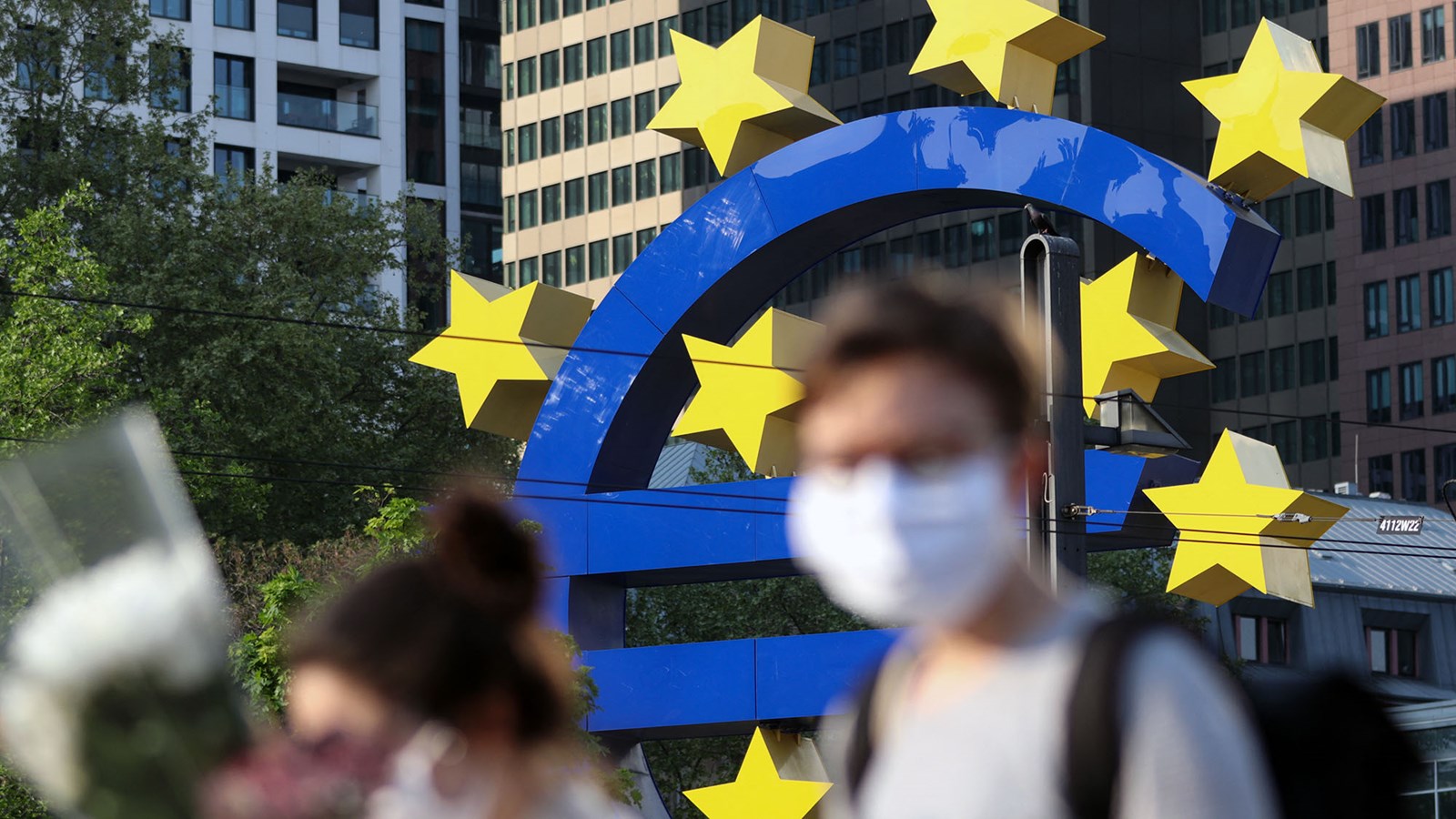 During the coronavirus (COVID-19) crisis, interest rates in the European money market were very divergent for some time. However, this was not the result of fragmentation in the market, and concerns about an impairment of monetary transmission were unjustified. This is because the differing rates can be explained by the unbalanced composition of the collateral used by banks in money market transactions. A wider spread of collateral could increase the resilience of the financial system and contribute to a more evenly spread transmission of monetary policy in the euro area. This can be stimulated by amending prudential regulation.

Fragmentation is a situation where similar players do not have access to financial products and services on the same terms, leading to an unlevel playing field. A sign of fragmentation is, for example, if price differences between two banks cannot be attributed to a difference in risk profile, but only to the banks' home countries (e.g. a Dutch bank has to pay a higher interest rate than a German bank with the same risk profile). Fragmentation is not the same as heterogeneity due to risk differentiation. After all, differences in interest rates that are due to unequal risks are essential for a sound financial system.

No fragmentation in the money market during the coronavirus crisis

In the money market, secured transactions – where collateral is used as a security – are by far the most important segment. The rate to be paid to borrow money depends on the quality of this collateral, for which sovereign bonds are often used. At the beginning of the coronavirus crisis - in spring 2020 - secured rates in the euro area temporarily diverged due to a flight to safety: there was more demand for German and Dutch bonds, and less for Italian and Spanish ones, for example. For some time, this led to significantly lower rates for transactions based on German and Dutch collateral (Figure 1). 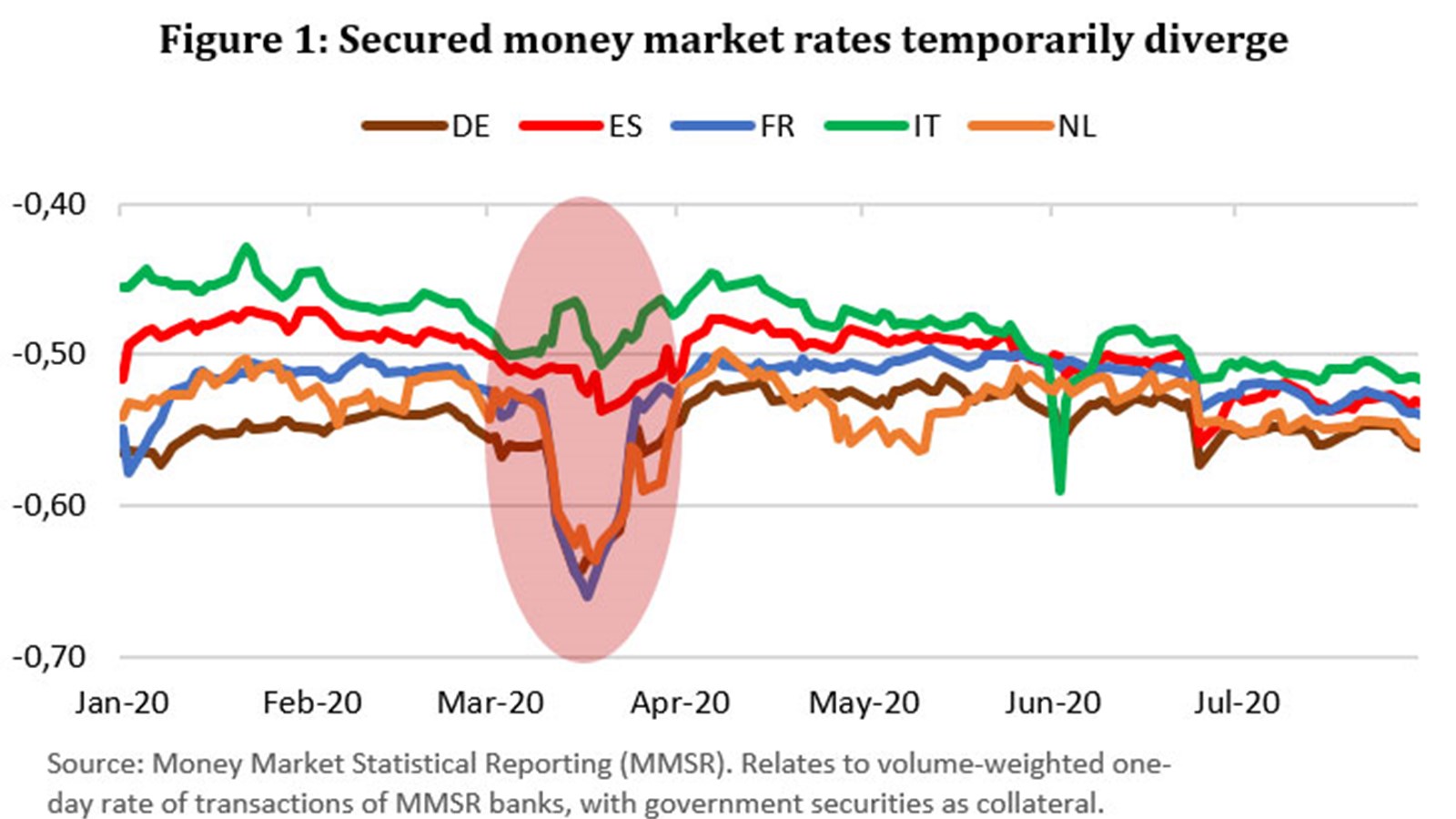 Collateral makes the impact of counterparty risk on rates negligible, especially with shorter maturities in the money market. An Italian and a German bank both using French collateral would therefore have to pay the same interest rate. If, after adjustment for the collateral used, interest rates for comparable parties continue to differ, this indicates fragmentation. Figure 2 compares the rate paid per national banking sector with the rate that banks would pay in other countries if they used the same collateral. The figure shows that, although rates were temporarily more divergent (spread of the dots), they remained in line with what could be expected on the basis of their collateral composition (difference between dots and lines). The varying rates are therefore not the result of fragmentation. 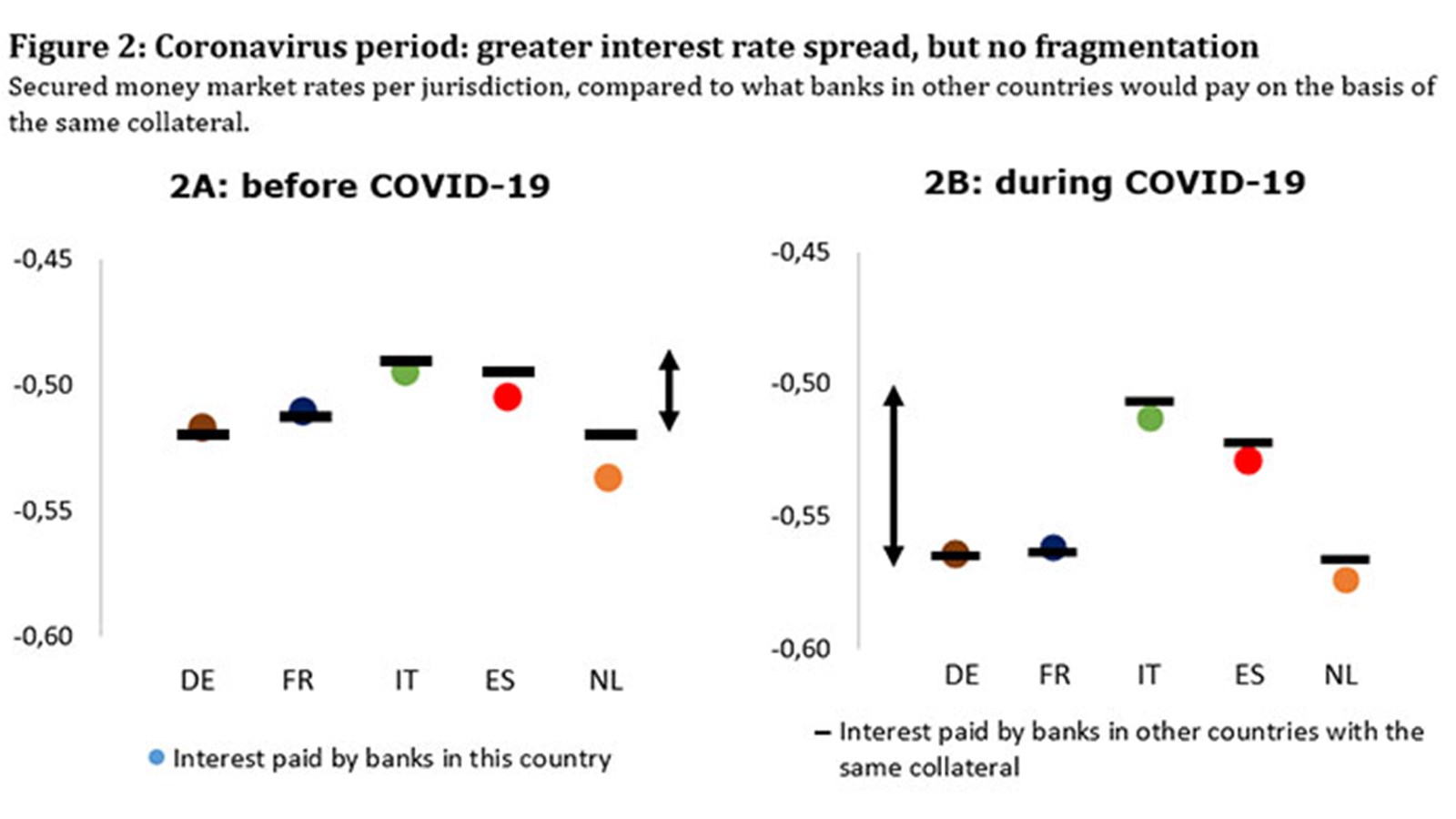 Differences in interest rates due to collateral composition

Although there is no fragmentation, banks from different countries have faced divergent funding costs. This is because the collateral mix of banks is highly country-dependent. The fall in rates for German, French and Dutch banks at the beginning of the coronavirus crisis is a direct reflection of the interest rate decline for their collateral. Italian and Spanish banks, on the other hand, benefited much less from the temporary interest rate drop, as they mainly have sovereign bonds issued in their own country on the balance sheet (“home bias”).

Divergent interest rates between jurisdictions may continue to lead to varying bank funding costs between (euro) countries. Especially in times of crisis, this can heighten existing vulnerabilities. The main cause of this is the homogeneous composition of collateral portfolios. Monetary measures may have little impact, but greater diversification of the collateral mix can be stimulated by amending prudential regulations, for example phasing out the preferential treatment of sovereign debt. The capital framework for banks currently sets less strict rules and lower capital requirements for government debt than for other assets held by banks. This preferential treatment contributes to a strong home bias.