The European Central Bank (ECB) has decided to revise and broaden its analyses for monetary decisions. Within the new analytical framework, economic and monetary analyses will be more closely integrated, and more attention will be devoted to long-term developments and financial stability. The ECB will also more explicitly assess the benefits and costs of policy measures it has taken.

Well-informed monetary decisions require the ECB to have a clear picture of the current economic conditions and outlook. This is why the ECB analyses information on how the economy will evolve. It uses an analytical framework to assess this information systematically, prevent blind spots and communicate about it consistently.

The strategy review was a natural moment to revise the framework, formalising previous adjustments and introducing new elements. While the revamped framework may provide new insights, the Governing Council does not expect the new analyses will immediately lead to a different monetary policy. This may change in the future, however.

Further integration and broadening of the analytical framework

Traditionally, the two analyses were prepared independently, and technically it was the Governing Council that had to piece them together in order to reach a final assessment. The financial crisis, however, has made it clear that the analyses need to be seen in conjunction. Employment and growth, for example, are also linked to credit development. The strict separation between the analyses has thus been removed, allowing for more attention on the interaction between these two sides of the economy.

In practice the monetary analysis also already included financial variables, in addition to monetary variables such as money growth and credit growth. After all, monetary policy also affects the financial markets and not just lending and money growth. This is all the more true for policy instruments such as the purchase programmes, which require a proper understanding of the state of financial markets in order to be effective. This is why the ECB has decided to formally extend its monetary analysis into a “monetary and financial analysis” (see Figure 1). 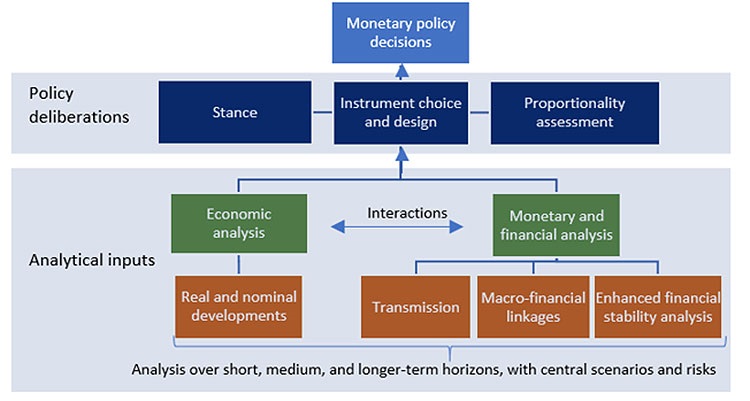 Developments such as globalisation, digitalisation and population ageing affect how the economy works. For example, globalisation has contributed to lower inflation, partly because production is increasingly taking place in countries where production costs are lower. Population ageing, given that more people are saving, has lowered the interest rate level at which the economy is in equilibrium.

The revised analytical framework will therefore explicitly incorporate longer-term analyses. These analyses should contribute to the best way for the ECB to achieve price stability in the medium term.

Moreover, the financial crisis has made it clear that the stability of the financial system is a prerequisite for price stability. That is why the ECB has decided to include financial stability indicators as a new element in the monetary and financial analysis on top of the already introduced financial variables. This is a clear innovation.

Macro-prudential policy, together with reliable supervision, remain the first line of defence against the build-up of financial imbalances. Monetary policy can only take financial stability into account to the extent that it has an impact on monetary instruments and on inflation.

More explicit weighting of side effects and proportionality

When making decisions, policymakers must weigh the benefits against potential side effects. This has become even more important as the ECB — in response to low inflation and the approaching of the lower bound on interest rates— has a number of policy instruments at its disposal, including most notably the purchase programmes. The revised framework considers more explicitly whether the inflation target could be achieved with fewer side effects. The analyses of longer-term developments and financial stability play a role in this. They support the search for combinations of monetary instruments that could contribute to lower risks to risks to financial stability, while remaining effective in achieving price stability. More attention will also be devoted to the possibility that the advantages and disadvantages of particular policy instruments may change over time.

Moving forward, the Governing Council will pay more explicit attention to the proportionality of the measures that are taken. In so doing, this principle – which the Governing Council already applied – will be embedded more formally in its monetary policy decision-making process. While this does not imply that the course of monetary policy will immediately change, the Governing Council will communicate on proportionality more frequently and explicitly. They may do so for example as a reason to use particular instruments to a greater or lesser extent, to adjust the design of instruments or to extend or reduce the term to achieve the inflation target.

This article is the third in a four-part series of DNBulletins on the ECB's strategy review. The first two DNBulletins addressed the inflation target and the measure of inflation, respectively. The last bulletin in this series will look at the role of climate and sustainability in monetary policy.