The Netherlands plays an important role in the international tax strategies of many multinational corporations. As a result of national and international initiatives against tax avoidance, this role has increasingly become a subject of debate. This has led to a decrease in both the number of special purpose entity (SPEs) in the Netherlands and, since 2017, in the foreign assets held by these companies. Roughly 15% of this decrease can be attributed to SPEs having launched non-financial activities, meaning they are no longer classified as SPEs. The balance sheet totals of smaller SPEs are shrinking more rapidly than those of their larger counterparts. For large SPEs, the Netherlands remains an attractive channel for investment flows.

Special purpose entities in the Netherlands

The Netherlands is home to over 12,000 special purpose entities (SPEs). With a combined balance sheet total of EUR 3,371 billion at the end of 2018, SPEs are the largest Dutch financial sector, outstripping even the banking sector (EUR 2,202 billion). SPEs are holding and finance companies belonging to foreign multinationals, which do not engage in any non-financial activities in the Netherlands, nor create employment. Thanks to these SPEs, the Netherlands is the single largest recipient of direct foreign investments in the world. These foreign investments are not absorbed by the Dutch economy, but invested in overseas subsidiaries. As such, the Netherlands is a crucial link in multinationals’ international investment flows, attracting corporations with its participation exemption and the large number of tax treaties that have been concluded with other countries to avoid double taxation. Added to this are tax exemptions for royalties and interest, plus up-front agreements that can be reached with the Dutch Tax and Customs Administration known as tax rulings.

In recent years, this role has increasingly been a subject of debate, however, as it is potentially linked to tax avoidance. Both the OECD and the EU have launched initiatives to combat tax avoidance by multinationals. The Dutch government, too, is developing policy aimed at preventing abuses, such as legislation that will impose taxes on interest and royalty flows to low-tax jurisdictions, which will enter into effect in 2021.

Over 70% of all SPEs in the Netherlands make use of trust offices or other representatives. These trust offices make postal addresses available to their customers, for instance, in addition to offering accounting services. Trust offices are under supervision by DNB. SPEs themselves are not under supervision, but they do report to DNB for the sake of macroeconomic statistics, such as the National Accounts and the balance of payments.

The number of SPE has decreased steadily in recent years, down from 16,000 in 2013 to 12,000 currently (see Chart 1). The decreasing numbers can be seen in both the SPEs that make use of the services of trust offices, as well as in other SPEs.

The decrease in the number of SPEs can be attributed in part to SPEs launching non-financial activities, causing them to be classified as normal companies. Examples include administrative activities, such as sales and marketing activities. This concerns approximately 500 entities, which together employ roughly 6,000 people. The new activities launched by these companies comprise both new activities in the Netherlands and jobs being shifted to the SPEs from already active affiliates in the Netherlands.

Chart 1 - Number of SPEs by type of representation* 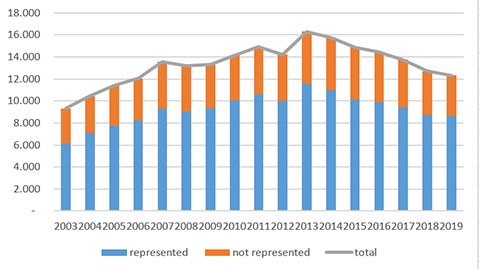 Representation by a trust office or other business service provider
Source: DNB

Despite the fact that the number of SPEs has been decreasing since 2013, the combined balance sheet total of the remaining SPEs initially continued to grow in subsequent years. In 2018, however, this trend reversed (see Chart 2). This decrease of the balance sheet total can be seen in SPEs which are represented by trust offices, as well as in other SPEs. The decrease is least visible in the ten largest SPE clusters. Consequently, these largest SPE clusters now account for almost a third of the balance sheet total. It appears that for this particular subset, the Netherlands remains an attractive location.

* Representation by a trust office or other business service provider
Source: DNB