Implementing an EU-wide tax of €50 per tonne of carbon emitted for the manufacturing, energy and transport sectors  will have a modest impact on the competitiveness of the Netherlands and most other EU Member States. However, the impact is bigger in many Central and Eastern European countries, especially in their energy sectors. Introducing a further tax for EU importers on the carbon content of imported products will ensure a more level playing field in the European single market. This emerges from an analysis conducted by DNB. It is one of the reasons why we support the European Commission's recent proposals to improve carbon pricing.

In July, the European Commission presented ‘Fit for 55', a comprehensive package of proposals to achieve the climate target of a 55% emissions reduction by 2030. The package includes proposals to improve carbon pricing by tightening the existing European emissions trading system (ETS), introducing a new ETS for sectors not covered by the current system and raising minimum levels of energy taxes. A further proposal is to levy a carbon tax at the European border, known as the Carbon Border Adjustment Mechanism (CBAM), that applies to imports of electricity, iron, steel, cement, aluminium and fertilisers.

Pricing greenhouse gas emissions is the most efficient reduction method. Emissions are still underpriced, partly due to concerns about negative effects on competitiveness. However, a new DNB analysis shows that carbon pricing at European level does not significantly erode competitiveness. Moreover, the modest negative effects on the single market can be largely eliminated by introducing a CBAM for specific carbon-intensive imports. Those countries and sectors that are significantly affected by higher taxes may need to be temporary compensated.

Currently, the ETS price is just over €50 per tonne of carbon, and it applies only to certain subsectors of the manufacturing and energy sectors. The DNB analysis shows the consequences if the EU were to levy a tax of €50 per tonne of carbon on emissions in the energy, manufacturing and transport sectors. These sectors are chosen because this is broadly in line with the ‘Fit for 55’ proposals to extend the ETS to include the gas and transport sectors and to cancelling free allocation of allowances for the manufacturing sector and air transport. 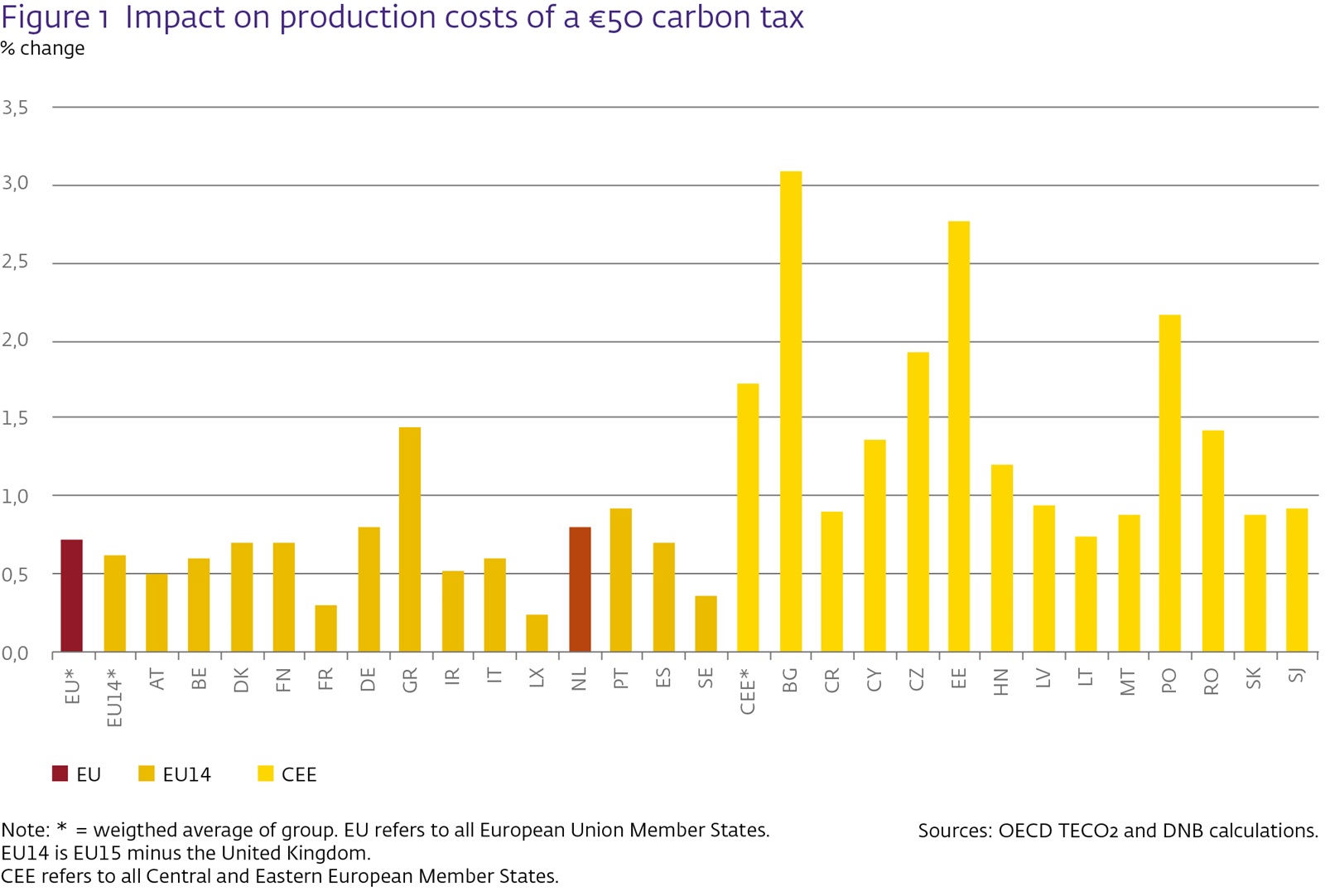 At 0.5% in the EU and the Netherlands, the impact on export competitiveness (i.e. increase in production costs relative to all trading partners of a country) is generally smaller than could be expected on the basis of the increase in production costs (see Figure 2). This is due to the fact that most EU Member States trade mainly with other EU Member States, which are also subject to a carbon tax. Nevertheless, the deterioration in export competitiveness in CEE countries is on average more than twice the EU average. This is also the case for Greece and Cyprus, because a relatively large share of exports goes to non-EU Member States. 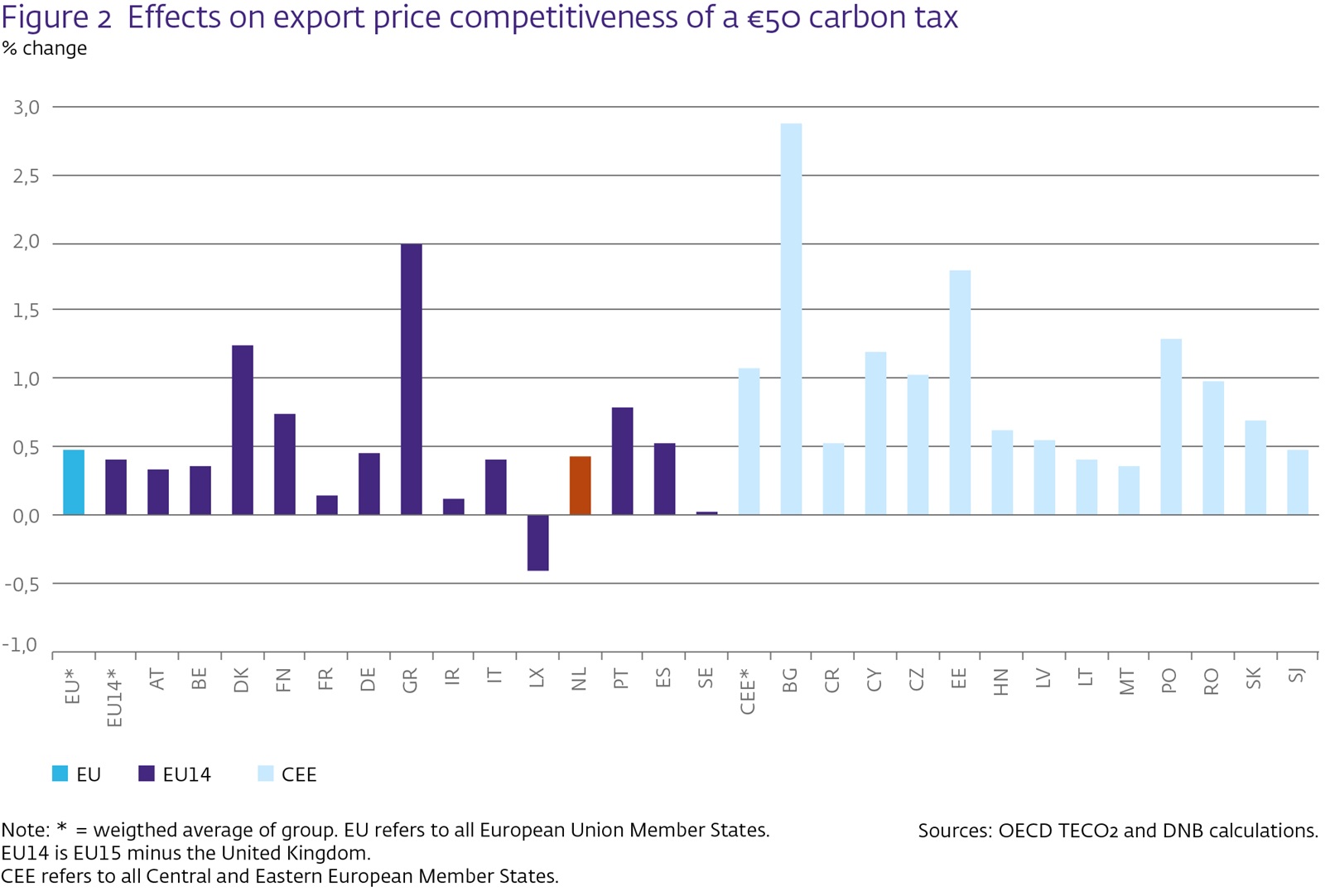 CBAM proves to be an effective instrument

Introducing a CBAM ensures that a level playing field is maintained in the single market as this also increases the costs of imports from countries that do not tax emissions or apply lower rates. However, a CBAM may also lead to a further increase in the production costs of European firms that use intermediate goods from outside the EU in their production process. At 0.2% this impact appears to be very low, however, because the use of non-EU intermediate goods is limited. The CBAM and carbon tax together increase EU import prices by 1.3% on average, compared to a 0.9% price increase in domestic production (see Figure 3). For most countries, including the Netherlands, the CBAM fully offsets any negative impact of a carbon tax on their competitiveness. Again, there are large differences between EU countries. Despite the CBAM, the competitiveness of half of the CEE countries still deteriorates slightly. 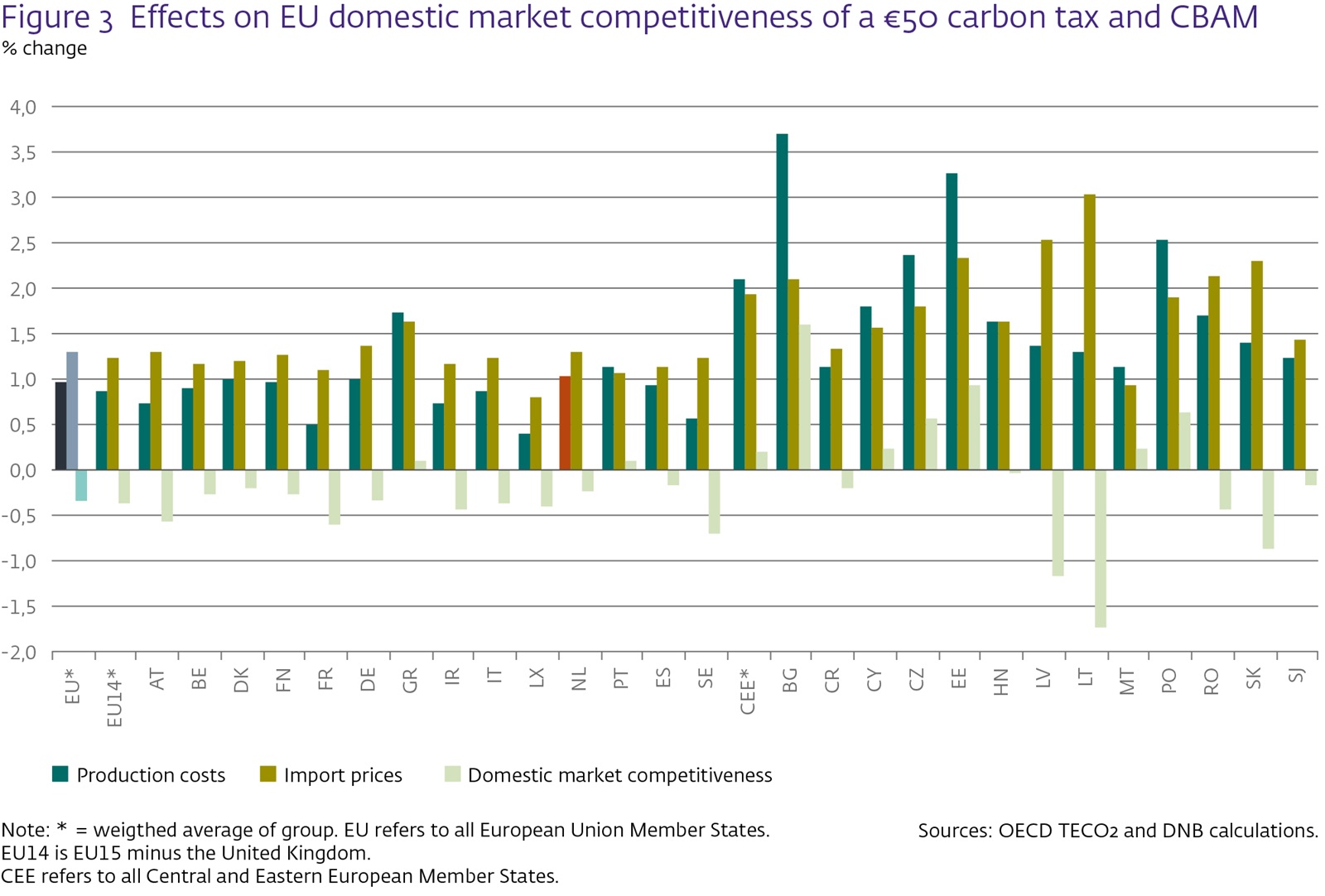 In practice, the effects of the carbon tax will probably be smaller than those shown in our calculations for several reasons  Some firms will find reducing emissions to be less expensive than paying the carbon price, as intended. Also, our estimates are based on data for 2015, while carbon intensity has decreased significantly in the last couple of years. The calculations also show that the competitiveness of carbon intensive sectors in some countries could be significantly affected by a carbon tax, even with a CBAM in place. A CBAM will not prevent a deterioration in export competitiveness, which means that extra support measures might be needed for the sectors most affected by the carbon tax, like subsidies for emission reduction. Other temporary compensation measures could also be considered, such as extending the Social Climate Fund. It’s important, however, to ensure that such measures still incentivise emission reduction.