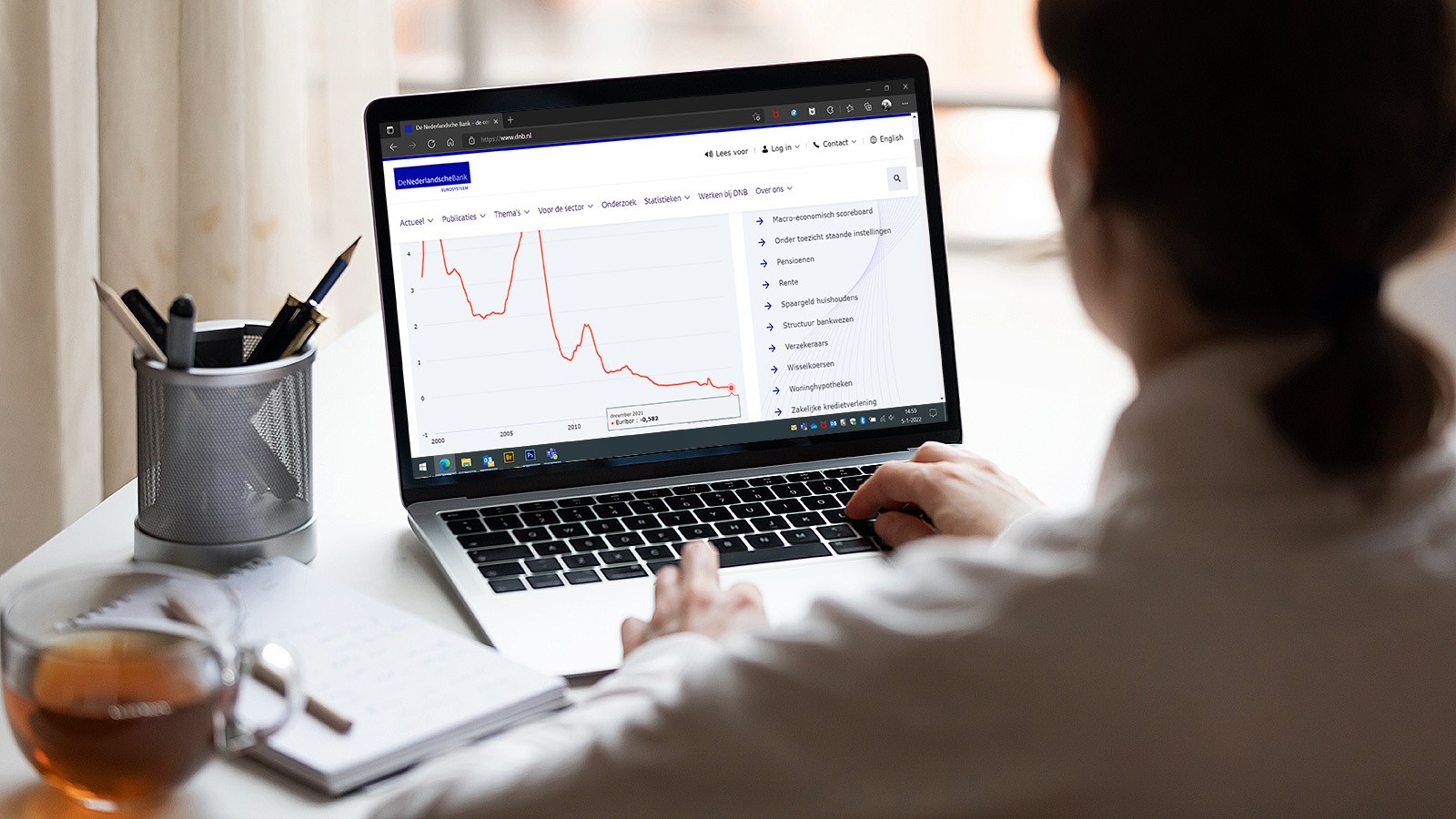 Higher interest rate levels are favourable for the banking sector. But a scenario of persistently low interest rates poses challenges. This follows from a new DNB study, which presents forward-looking scenarios for the profitability of Dutch banks. Cost savings and measures to reduce banks’ dependence on interest income are ways to maintain profitability during a prolonged period of low interest rates, thus allowing them to still meet investors' return requirements.

A healthy banking sector contributes to financial stability and supports the economy. Healthy banks are continuously able to play their role within the financial system and have sufficient buffers to absorb losses. Profits play an important role in this respect, as they offer a first line of defence against negative shocks. However, tension can arise between banks’ pursuit of profit and their role in society. For example, profit maximisation for shareholders may come at the expense of the accessibility of payments and other financial services. In addition, in their pursuit of profitability, banks could be prepared to take greater risks than are socially desirable to maintain financial stability. This is one of the reasons why banks are subject to regulation and supervision.

Profitability of banks restored after the financial crisis

Following years of subdued profits of Dutch banks due to the financial crisis and the European sovereign debt crisis, bank profits rebounded from 2015 onwards (see Figure 1). The favourable economic conditions, which have limited credit losses, and the significant cost cuts made by banks are among the reasons for this recovery in profits. In 2020, the COVID-19 pandemic caused another sharp drop in profits. Although profitability recovered in 2021, low interest rates continue to weigh down on net interest income, which are the banks’ main source of income. 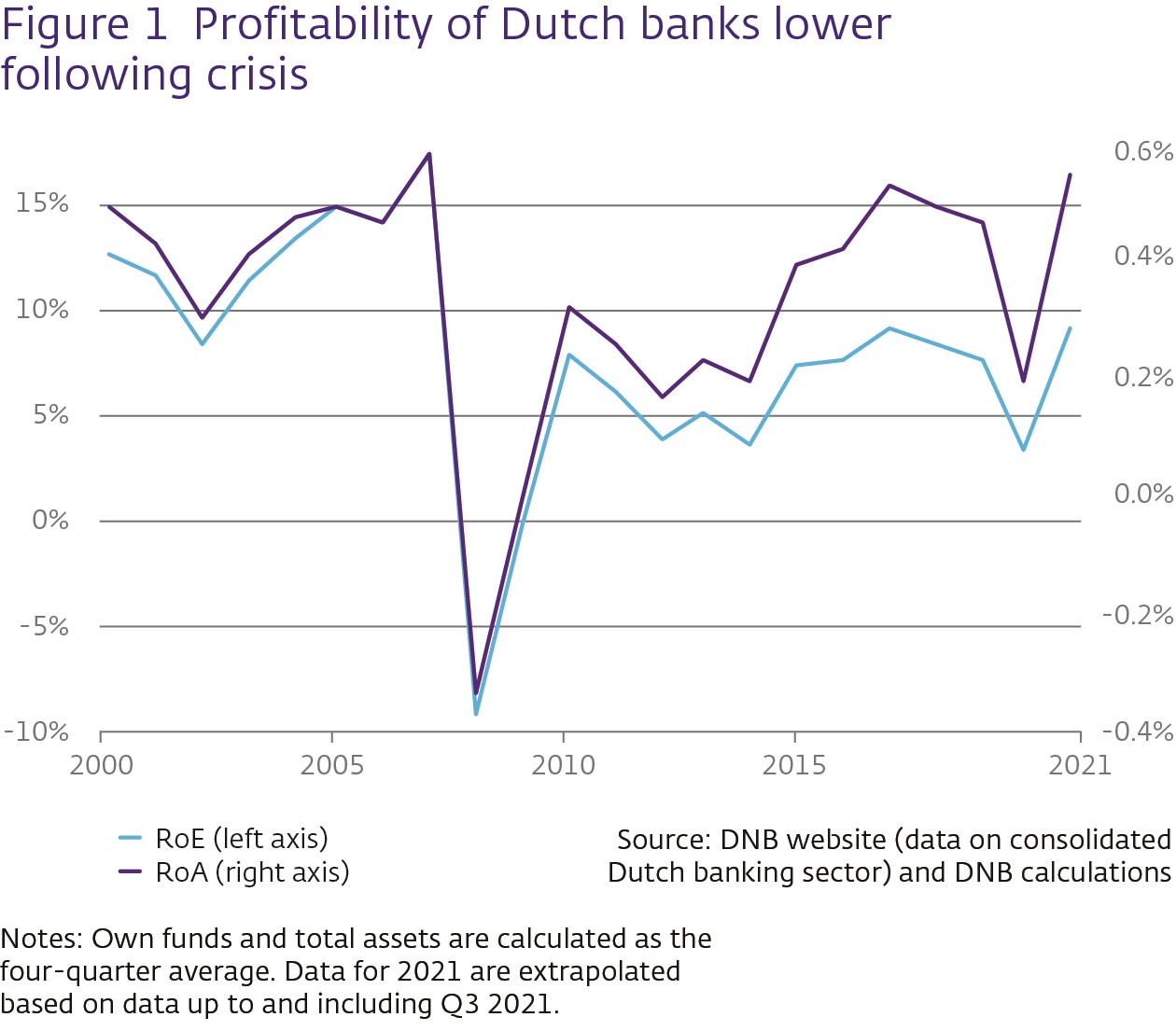 Scenarios for future profitability of banks

Based on a scenario analysis, we have estimated the future profitability of four major Dutch banks (ABN Amro, ING, Rabobank and De Volksbank). We examined the impact of the interest rate environment using two scenarios: one in which interest rates remain low for a prolonged period (“Low for longer”), and one in which interest rates rise (“Rising interest rates”). The impact of the scenarios is also partly determined by the banks' ability to cut costs and reduce their sensitivity to negative interest rates. Banks may try to reduce their reliance on interest income by providing more financial services that earn them compensation in the form of a fee or commission, for example. The scenarios are not predictions, but a long-term mechanical exercise. They do not take into account various other factors, such as the economic business cycle.

In the Low for longer scenario, banks' interest margins are squeezed further. If banks do not adjust, their average return on equity (RoE) will drop from the pre-COVID-19 level (7.8%) to below 5% (see Figure 2). In this scenario, banks can only maintain their RoE by making drastic adjustments. 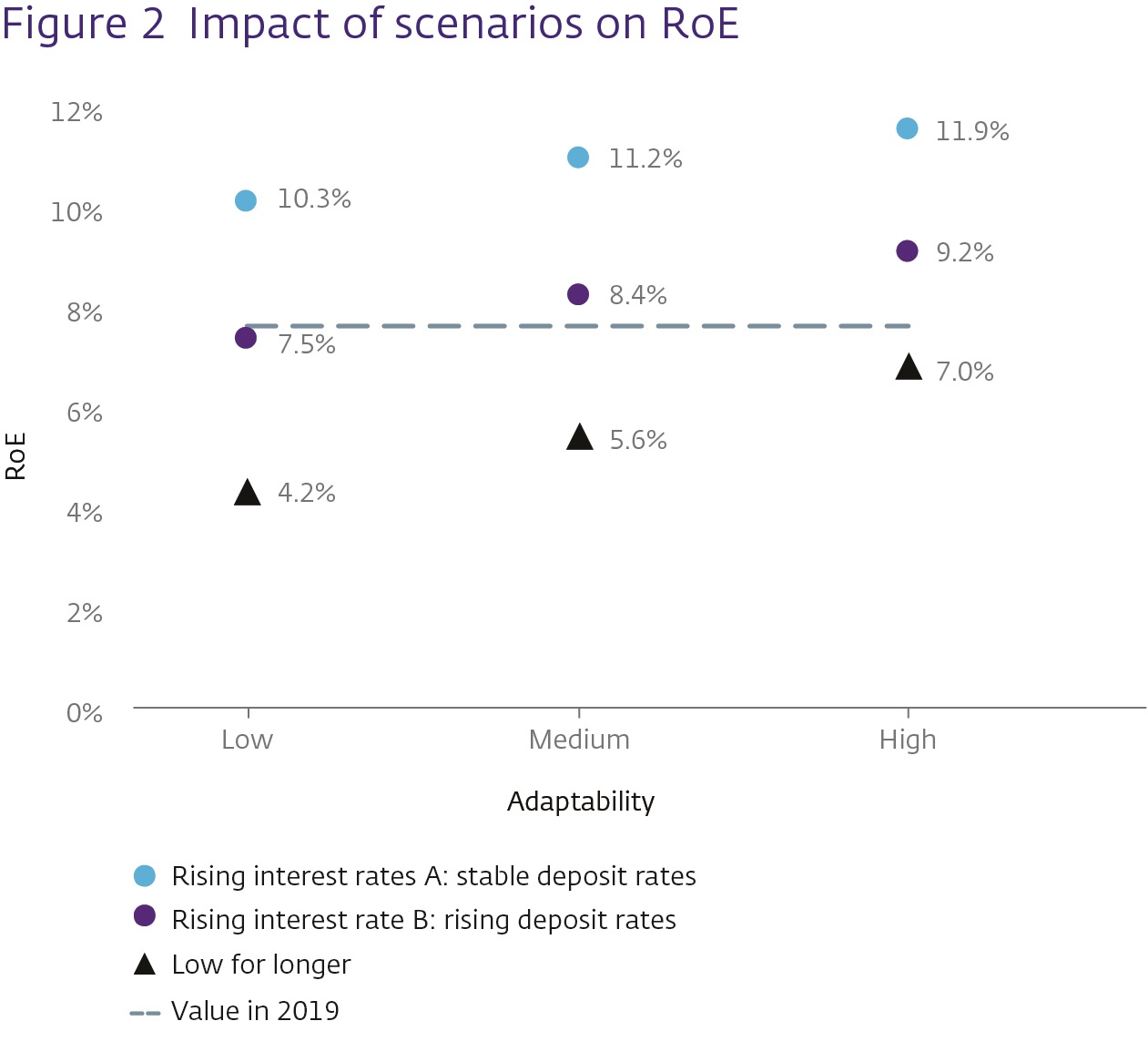 The picture is more favourable in the Rising interest rates scenario as banks' interest margins are expected to increase again. Expectations are that banks’ borrowing rates – mostly rates on deposits – will increase less than banks’ lending rates on loan portfolios. In the most favourable scenario variant, in which banks keep their deposit rates stable (variant A), the average RoE goes up to exceed 10%. However, if deposit rates move more in line with market rates, (variant B), the RoE well end up several percentage points lower. Although a higher interest rate environment is beneficial for the banking sector in the long run, a rise in interest rates can also have adverse effects in the short term, for example through growing loan losses. Such effects were not considered in this study.

We present the results at an aggregate level, which does not alter the fact that they may vary for individual banks due to, for example, differences in their ability to adapt and their business models. Neither have we included the impact of factors such as changing business models due to the rise of BigTechs, climate change, and possible long-term effects of the COVID-19 crisis. Especially if banks fail to respond well to such factors, their profitability may come under further pressure.

It is important that banks formulate plausible profit targets, which they can achieve without taking excessive risks. Our scenarios suggest that profit targets of 5% to 10% RoE are plausible, although this may be a challenge for some banks, especially if interest rates remain low for a longer period. In addition, investors in bank shares are still expecting returns that, on average, are at the upper end of the scenario outcomes in Figure 2.