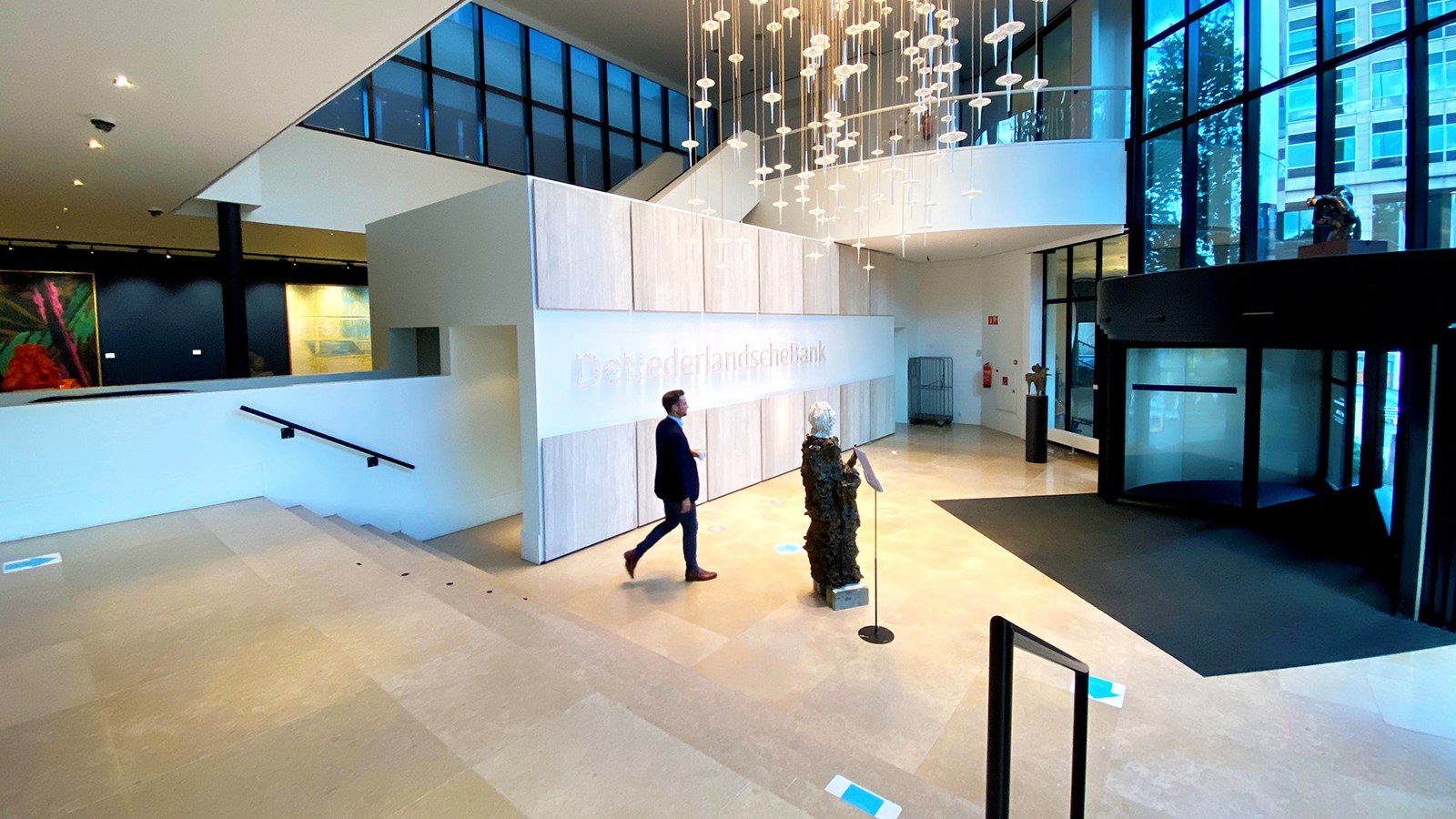 Commercial banks end the year on a profit or loss, but what about a central bank like De Nederlandsche Bank (DNB)? And what happens if DNB makes a profit, or indeed a loss? Does DNB maintain buffers to absorb losses? And what’s the financial bottom line after 23 years of working with the euro?

Since the introduction of the euro in 1999, we have made a total profit of €22.6 billion

Of this amount, we paid out €16.2 billion in the form of dividends to the Dutch State, which is our sole shareholder. The transfer of our profit qualifies as central government revenue, and is therefore an important element of the state budget. We used the remaining €6.3 billion portion of our profit to strengthen our capital base. This helps us bear the risks associated with the implementation of the European Central Bank's monetary policy. Profit is not a goal in itself but a consequence of monetary policy and of our own investments. This means the size of our profit is inherently uncertain. Given the persistently low interest rates, profit expectations are low and losses cannot be ruled out for the near future. Our profit originates from various sources that make both positive and negative contributions. The figure below shows the cumulative development of these profit sources since the introduction of the euro. 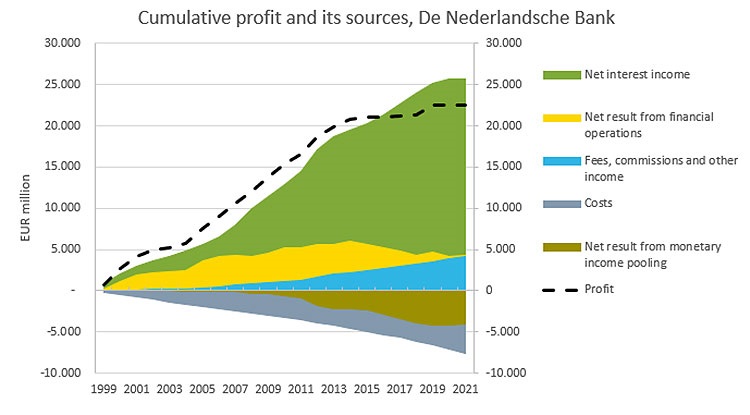 The main source of our profit is 'net interest income', which has totalled €25.7 billion since 1999

Since 1999, we have earned approximately €4.3 billion in “net result from financial operations”

This also includes income from our own investments. These are investments which we actively make and that serve as a counterpart to liabilities, such as banknotes in circulation. The expected positive return on those investments yield income, compared to banknotes, on which no interest is paid. In addition, our own investments also provide us with the necessary knowledge of current developments in financial markets. At present, we have invested €4.6 billion in sovereign bonds, €2.7 billion in equities and around €1.2 billion in corporate loans. Approximately 10% of our own investments are in green bonds. By 2025, we want our own investments to be in line with the targets set in the Paris climate agreement as far as possible. With this, we seek to manage the impact of climate-related risks on our balance sheet and contribute to the transition to a sustainable economy. We already exclude firms involved in the production of cluster munition, landmines or chemical, biological and nuclear weapons. Furthermore, we own gold, on which we receive no regular income, but we are exposed to its appreciation or depreciation. We account for this by maintaining a revaluation reserve on the balance sheet, so that it does not affect our profit. Only if we were to sell gold would we record gain or loss.  Net income from financial transactions also includes additions to or withdrawals from a provision for financial risks. This provision is an extra buffer, in addition to our capital, to absorb shocks.

Another source of our income is “fees, commissions and other income”

This largely concerns the fees raised from the supervised institutions, but also the dividends we receive annually as a shareholder of the European Central Bank and the Bank for International Settlements (BIS) in Basel, Switzerland. Cumulatively, this source has amounted to €4.1 billion since the introduction of the euro. We also provides paid services to several other central banks and the Dutch State.

Since 2015, we have been purchasing bonds from the Dutch State in the secondary market as part of the ECB’s purchase programme aimed at countering deflationary price developments

With these purchases, we implement the monetary policy aimed at price stability adopted by the ECB’s Governing Council. Give that we have purchased these bonds, especially in recent years, at very low and sometimes even negative interest rates, their contribution to our profit is limited. The Eurosystem also buys corporate bonds. We benefit from the revenues on these bonds, but also contribute if unexpected losses occur.

Since the euro’s introduction, this has yielded us a cumulative negative net result from monetary income pooling of €4.1 billion. This is because loans granted to and deposits taken from commercial banks are unevenly distributed throughout the Eurosystem. Some central banks grant a relatively large amount of loans to commercial banks and others receive a relatively large amount of deposits. These proportions shift over time, and the Eurosystem’s annual net result is pooled among the central banks in the Eurosystem. This can therefore make a positive or a negative contribution to our profit. In the last two years, its contribution was positive.

Since 1999, we have incurred costs of €7.5 billion. This includes the costs related to supervision, resolution and the deposit guarantee scheme.  The costs of supervision and the contributions paid by the supervised institutions cancel each other out. Then there are the costs related to financial stability, payment systems, monetary policy and own investments and statistics. Also included in this item are banknote production costs, other administrative costs and depreciation of tangible fixed assets. The table below summarises our cumulative profit and loss account for the last 23 years.

Profit expectations are low and losses cannot be ruled out

Our balance sheet total has grown significantly in 23 years from €42 billion to €510 billion. This strong growth is mainly driven by the bond purchases mentioned above. With that, the interest rate risks and credit risks on the balance sheet have also increased significantly. Since the start of the ECB’s large-scale purchase programmes in 2015, we have therefore annually set aside a substantial amount to cover these increasing risks. The provision for financial risks now stands at €2.8 billion. If money market rates rise rapidly, this will negatively affect our profit and may even result in a loss. This is because the bonds we purchased at low or even negative interest rates will remain on the balance sheet for a long time to come. If the Eurosystem decides to increase the deposit facility rate, the combination of low interest rates received on bonds and high interest rates paid out on deposits may result in losses. So in the first instance, the buffers we have built up in recent years will cushion such a loss. Incidentally, these potential losses are related to the very low interest rates on Dutch sovereign bonds – something from which the Dutch State also benefits directly.