Additional guidance on the Loss Absorbing Capacity of Deferred Taxes

This Q&A provides additional guidance on the elements DNB considers when assessing the adjustment for the loss-absorbing capacity of deferred taxes (LAC DT). LAC DT is also part of the review Solvency II capital requirements in 2018. The outcome of that review as well as other new insights may result in amendments to this Q&A. DNB expects insurers to take account of these elements in the substantiation of their LAC DT as soon as possible, but at the latest in their figures over 2017Q2.

The key concepts and their definitions are listed below:

In determining the post-shock financial position, the insurer takes the following into consideration:

Recovery from the shock

If the insurer includes raising additional borrowed capital or own funds in its substantiation of LAC DT as a measure to establish renewed compliance with its capital requirement after the shock loss, the insurer factors in that the likelihood of recapitalisation declines as the solvency position decreases.

The undertaking completes various steps to raise additional capital. Factors that are decisive for the ultimate success of an issuance in terms of volume issued include the existence and size of a group of potential investors and, in the case of borrowed capital, the issuing institution's rating. The insurer takes account of these aspects when substantiating recapitalisation for LAC DT.

In the case of recapitalisation of one or multiple entities in a group as part of the substantiation of LAC DT the insurer demonstrates that:

If the insurer uses future profits to substantiate LAC DT, it takes account of dividend distributions in line with its capital and dividend policy.

In substantiating LAC DT, the insurer considers the fact that projected income and expenses are subject to uncertainty. Importantly, the insurer takes the asymmetric nature of LAC DT into account. For example, higher surplus returns do not necessarily result in a much higher LAC DT, whereas lower surplus returns may result in a sharply lower LAC DT. The insurer factors this uncertainty into the amount of any post-shock net DTA, as well as into the pre-shock net DTA. One of the options for doing so is averaging various outcomes resulting from upward or downward adjustments of assumptions in the substantiation of LAC DT, for example by (1) doubling expected surplus returns and assuming more new production once; and (2) setting expected surplus returns and new production to nil once.

Time of materialisation of bSCR* shock for tax purposes

The loss resulting from the bSCR* shock will materialise immediately in the Solvency II balance sheet, but not in the balance sheet for tax purposes. For this reason, the insurer takes into account, for each individual element of the shock loss, when and to what extent the loss will materialise for tax purposes in substantiating the net DTA with future profits. Both the pattern and the volumes over the projection horizon are relevant. Shock losses incurred on assets whose returns are tax-exempt, such as specific shareholdings exempt from Dutch corporate income tax under the participation exemption (deelnemingsvrijstelling) are unavailable for set-off against taxable profits. For this reason, they directly result in a reduction of the maximum LAC DT to be achieved.

Illustrative example of diversification in substantiation of recapitalisation in LAC DT

An insurance group comprising of two entities, entity A and entity B, is assumed.

Following its bSCR* shock of 200, entity A has own funds of 125 at an assumed post-shock capital requirement of 200. It shall try to achieve renewed compliance with the capital requirements within the applicable recovery periods through risk reduction measures or recapitalisation. One recapitalisation option is withdrawing own funds from entity B to supplement entity A's own funds. To determine entity B's actual own funds, the insurer first applies the shock that is relevant to entity B to entity B's balance sheet. That shock is such that the sum of all shocks applied to the entities equals the bSCR* for the group. The bSCR* for the group is 250 and the shock applied to entity A is 200, which means that the insurer applies a shock of 50 to entity B in order to determine its post-shock available own funds. This shock need not be broken down into risk drivers or be specified in a comprehensive post-shock entity B balance sheet, as this merely concerns establishing entity B's actual own funds available following the shock for entity A's recapitalisation. Following the shock, entity B will have 125 in own funds at an assumed post-shock capital requirement of 100. Depending on the group's policy on the minimum capitalisation of its entities, there may be room for transferring a maximum of 25 in own funds from entity B in order to recapitalise entity A. This would bring entity A's own funds to 150 at an assumed capital requirement of 200, after which the insurer could eliminate the remaining capital deficit through recapitalisation or risk reduction measures. 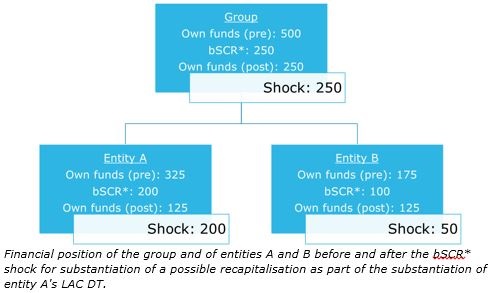 In the same group, following its bSCR* shock of 100, entity B has own funds of 75, which is insufficient to meet the assumed post-shock capital requirement of 100. To consider whether entity A has room to fully or partly recapitalise entity B, the insurer first applies the relevant shock to entity A's balance sheet. The relevant shock is 150 here, representing the bSCR* for the group of 250 less the bSCR* shock of 100 applied to entity B. Entity A's loss of own funds of 150 results in post-shock own funds of 175. This means that entity A fails to meet its assumed capital requirement of 200, which leaves no room for entity A to recapitalise entity B. Accordingly, to substantiate recapitalisation as part of the substantiation of entity B's LAC DT, the insurer must apply other risk reduction or recapitalisation measures to ensure that entity B restores compliance with its capital requirements following the shock. 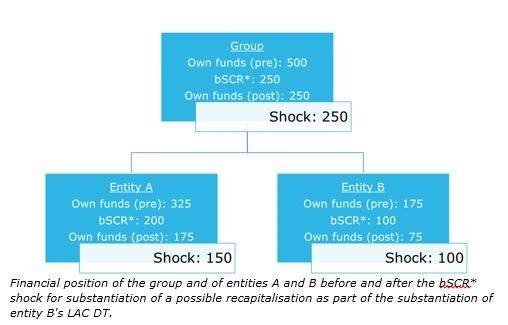