Home ownership costs to be incorporated in the inflation measure

The costs of home ownership are to be included in the inflation measure of the European Central Bank (ECB). So far, most of these costs are not covered. But the ECB considers it important for such costs to be factored in to achieve as accurate an inflation measure as possible, so that it better matches the price increases perceived by citizens.

The costs concerned are those incurred in the purchase of newly built homes or former rented accommodation,  costs incurred in acquiring a house from a previous owner – such as real estate agents' and civil-law notaries' fees – and costs of renovation and maintenance of an existing home and insurance premiums. The purchase price of an existing own house is not included in the new measure. The ECB this summer committed to a process to implement this decision and will include the indicators already available in its measurements pending completion.

Home ownership costs fall outside the scope of  HICP

The ECB strives for stable consumer prices. For this purpose, it uses a specially developed European harmonised index of consumer prices, the HICP, which is allowed to increase by around 2% per year for the euro area. In recent years, the price increase has consistently been below 2%, and the ECB has kept interest rates low to stimulate inflation. However, during listening events the ECB held, many citizens – particularly in the Netherlands – indicated that they were more affected by rising prices. In this regard, they referred to the sharp increase in the costs of home ownership. However, these costs largely fall outside the scope of the HICP, while they account for a sizeable share of the expenditure of home owners. The lack of home ownership costs in the measure of inflation may contribute to the relatively large discrepancy in between the inflation that citizens perceive and the inflation that the ECB measures.

The owner-occupied housing price index (OOHPI) measures the costs of home ownership. This includes the cost of purchasing the property, as well as repairs, maintenance and insurance premiums. In addition to the purchase price, the costs of acquiring the property includes transfer tax and real estate agent's and civil-law notary's fees. In recent years, the OOHPI in the Netherlands has risen quite strongly under the influence of rising house prices. In the euro area as a whole, the increase in OOHPI is much lower, but still higher than the HICP inflation (see Figure 1). 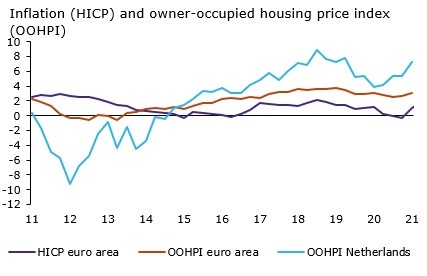 As part of its strategy review, the ECB has investigated how to include the costs of home ownership in the HICP. Multiple options were considered and each measure has its pros and cons. The ECB's final decision was to include the existing OOHPI in the HICP over time, which is in line with the approach we advocated. However, there is still a lot of work to be done before that can be realised. For example, the OOHPI is available on a quarterly basis only and not for all countries, while the HICP is published every month. In addition, the item of owner-occupied housing costs still needs to be assigned a weighting in the HICP. Eurostat will pick up this aspect in cooperation with the national statistical institutes. Besides these practical issues, there is also a legal process to be followed before the costs of home ownership can be incorporated in the official HICP.

All in all, it will take until approximately 2026 before the adjusted HICP, including the item for home ownership, will have been implemented. However, this does not mean that there will be no changes in the short term. For example, the ECB's Governing Council has indicated that it will already use the existing OOHPI for the euro area in its deliberations. We are also working on a solution for integrating the costs of home ownership in our own analyses.

Eventual impact on inflation is expected to be limited

Based on the available data and an estimate of the appropriate weights, incorporation of the costs of home ownership would have resulted in a HICP increase for the euro area of about 0.2 percentage point on average over the past decade. For the Netherlands, where OOHPI inflation is higher, the HICP would have been about 0.5 percentage point higher. Incidentally, Figure 1 shows that this is not necessarily the case. There have also been a number of years in which the OOHPI increased less steeply than the HICP. The impact is therefore expected to be noticeable, but limited. During periods in which house price developments differ significantly from the HICP and the weight of home ownership costs is relatively high, the impact of OOHPI on the HICP may be greater.  Looking back, this would certainly have been the case for the Netherlands.

This article is the second in a short series of DNBulletins on the ECB’s strategy review.  Earlier, we published a DNBulletin on the inflation target. Forthcoming DNBulletins in this series will address the analytical framework that forms the basis for the ECB's monetary policy, and how climate considerations are reflected in monetary policy.