Stable distribution of labour and profit income despite coronavirus crisis

Despite the coronavirus crisis, the distribution of labour and profit income has remained constant. This is reflected in the labour income share (LIS) development of the market sector in 2020. It is notable that the LIS has remained stable. Generally, the LIS shows significant cyclical fluctuations. This atypical pattern is linked to two factors: government support measures and the asymmetric impact of the coronavirus crisis.

LIS of the market sector stable in 2020

The LIS is the share of gross value added that is received by workers (employees and the self-employed) for their labour. In the Dutch policy debate, the LIS of the market sector is particularly relevant. The market sector includes all industries except government, healthcare, real estate, finance and mining. The counterpart of the LIS is the capital income ratio, which reflects the share of gross value added that accrues to capital providers, i.e. profit income. 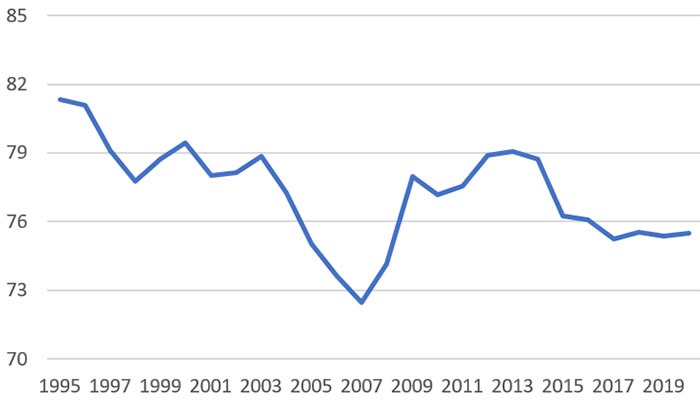 The fact that the LIS has so far remained constant during the coronavirus crisis is remarkable. Generally, the LIS rises sharply during a crisis. This negative relationship with the state of the economy is largely driven by the high costs associated with workforce adaptation, such as redundancy, recruitment and onboarding. In addition, collective labour agreements often run for several years. As a result of both aspects, there are initially fewer redundancies and gross wages remain unchanged, which increases the LIS. But in the first phase of the cyclical upturn, fewer people are hired and the LIS decreases. Economic shocks are thus mainly absorbed by companies through operating profits.

In the crisis year 2009, for example, the LIS of the market sector increased by 4 percentage points to 78.0%. At the time, companies’ operating profits fell by €16 billion to €66 billion in 2009. On the other hand, the total remuneration of labour only decreased by €1 billion to €233 billion. In parallel to 2009, real GDP contracted by 3.8 % in the crisis year 2020. Once again, this has not been at the expense of labour remuneration. In fact, the income of working people even increased by €4 billion last year. The major difference with 2009 is that the economic contraction has not been at the expense of operating profit, which increased slightly, by EUR 0.5 billion.

The atypical pattern of the LIS in 2020 is related to two factors: government support measures and the asymmetric pass-through impact of the pandemic.

The government's support measures mitigated the economic damage of the pandemic to businesses and workers. In 2020, non-financial corporations received subsidies totalling €31 billion. This is an increase of €23 billion. The support consisted mainly of compensation for wage costs and fixed costs. Without government support, operating profit would have been significantly lower, resulting in an increase in the LIS.

Even after the financial crisis in 2008, the government cushioned the economic damage with support measures. Unlike in 2020, a significant part of the support at the time concerned capital injections for the financial sector, where the crisis initially originated. By contrast, the subsidy for non-financial corporations increased by only €1 billion in 2009 compared with 2008.

Asymmetrical pass-through impact of the pandemic

More so than in previous crises, the COVID-19 crisis has affected businesses asymmetrically. While some firms and sectors have been hit hard, others have suffered much less or even benefited. Profits have come under pressure, particularly in those services sectors where physical contact is substantial.  For example, operating profit decreased by 12% in the transport and storage sector; 42% in the hotel and catering industry; and 26% in other business services, which includes travel agencies. On the other hand, profits of commercial businesses increased by 9%. Retailers in particular, have temporarily benefited from higher demand. The social distancing measures meant that households could consume fewer services, which they partly compensated for through higher spending on, for example, sportswear and electrical equipment. Construction firms also saw a strong increase in demand, resulting in a 32% rise in operating profit. The increase in LIS in hard-hit sectors has thus been offset by a decline in sectors that actually developed favourably in 2020 (Figure 2). 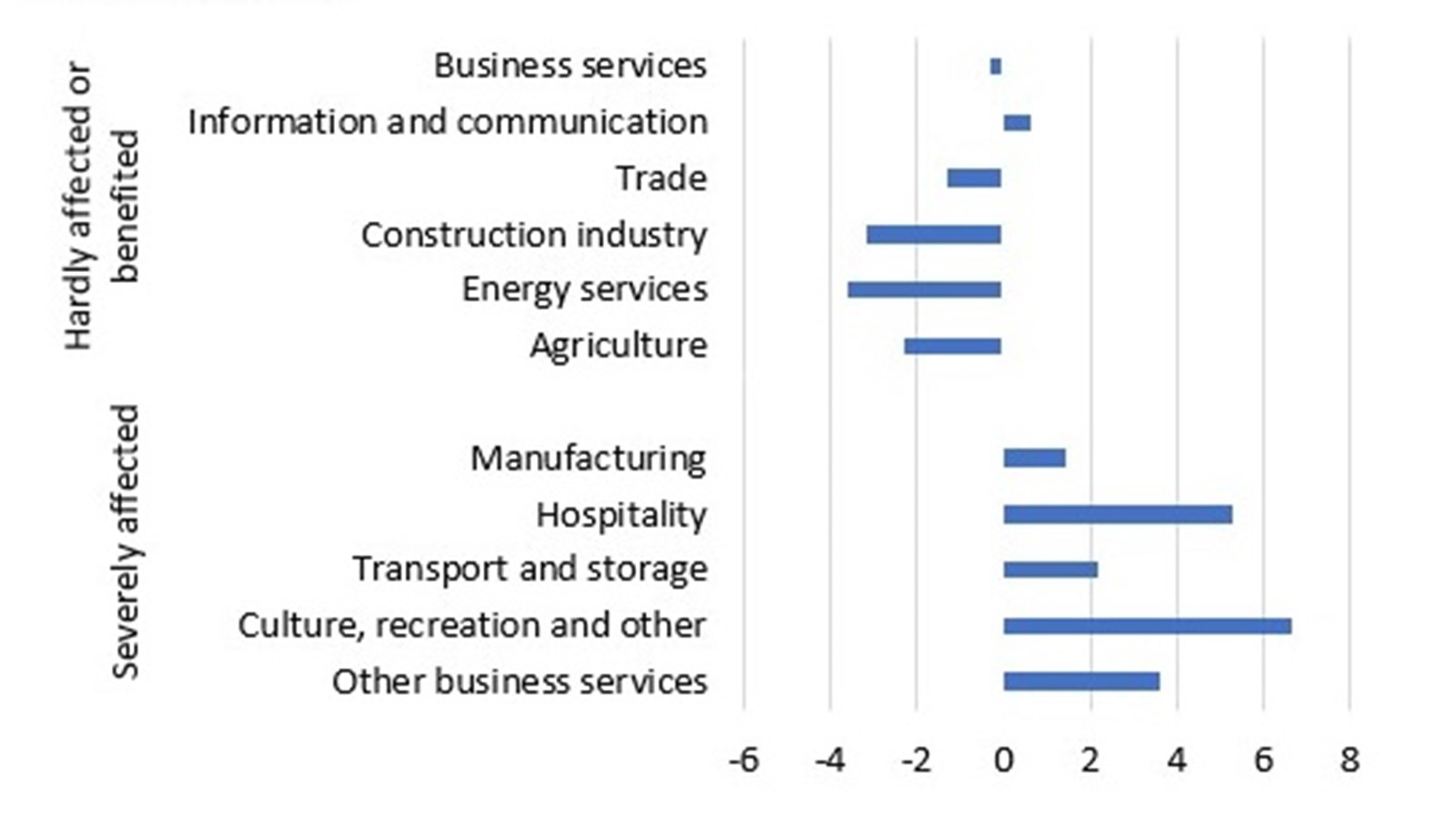