Towards a global price for carbon emissions

From an economic perspective, pricing is the most efficient means of reducing carbon emissions. As climate change is a worldwide problem, carbon pricing works best with a global price for carbon emissions. However, complete global pricing seems infeasible. It is therefore necessary to focus on intermediate solutions in the coming years. This can be done, for example, through agreements on pricing between the largest economies, between countries that already have existing carbon pricing systems, or through agreements for specific sectors. DNB urges the Netherlands to support these intermediate solutions.

Carbon pricing is on the rise in recent years

The main reason for the slow approach to climate change is that polluters are still not paying nearly enough to cover the social costs of their carbon emissions. Consequently, companies and people worldwide have few financial incentives to switch to more sustainable business models and reduce their emissions. Carbon pricing could be a solution. It gives governments a tool to make carbon-emitting businesses pay a fair price for their climate impact.

The global coverage of pricing mechanisms for carbon emissions has increased in recent years (Figure 1). According to the World Bank, just over 20% of global carbon emissions are taxed in 2021. Last year that was only 15%, and in 2010 this figure was around 5%. The increase in the last year is mainly due to the introduction of an emission trading system (ETS) for energy companies in China. This means there is now an explicit price for around 30% of emissions in China, which is an important step as most of the world’s carbon emissions actually occur in China (28% of global emissions in 2019, compared to 18% for the EU and 15% for the United States).

Incidentally, the European ‘Fit-for-55’ climate package announced last summer has not yet been included in these data. This plan includes proposals for a higher explicit pricing of carbon emissions, especially in the built environment and in transport. In those sectors, most countries – including the Netherlands – now only have implicit pricing, such as taxes on energy consumption and fossil fuels. With full implementation of the Fit-for-55 package, around 75% of European emissions would be explicitly priced in 2030. This way, Europe shows that agreements on carbon pricing across national borders are possible. 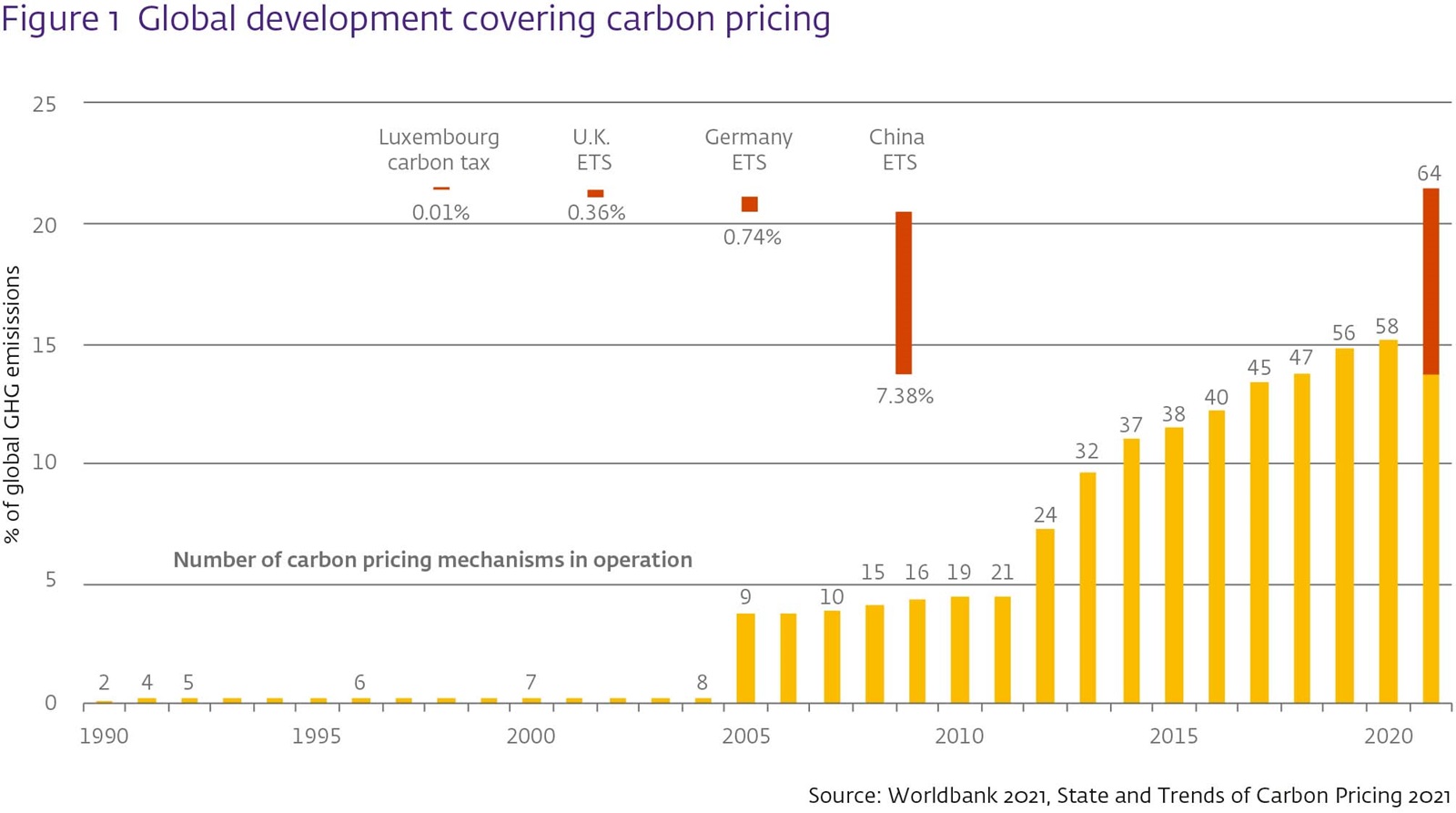 It is good that more and more carbon emissions are being priced, but it is still usually at much too low a price. According to the World Bank, prices for one tonne of carbon dioxide should now be between $40 and 80 in order to stay on track to meet the targets of the Paris Climate Agreement. Under most pricing systems, even the $40 is far from being reached: in total, only 4% of global emissions are priced at more than $40. The European Emissions Trading Scheme is an important exception here: its price is now around €60 per tonne. Under the European Emissions Trading System, many industrial sectors – such as the steel industry and refinery– currently still receive free allowances, but these will eventually disappear if the proposals from the Fit-for-55 package are adopted.

Given the fact that climate change is a global problem, carbon pricing should ideally be the same across the board – for every company, in every country. As long as full global carbon pricing is not feasible, DNB sees three intermediate steps to improve global pricing.

The largest economies can agree on a common minimum price for carbon emissions. With a small number of parties, negotiations are easier than, say, in the context of the Conference of the Parties (COP), because the COP has no less than 197 participants. According to the IMF, an agreement between only China, the United States, India and the EU would cover 63% of projected global emissions in 2030. Parties like the OECD and the IMF have already called for such an agreement.

The existing emissions trading systems of different countries can be further integrated. This could level out carbon prices and lead to more efficiency in achieving climate targets. The European Union, China, Canada and South-Korea all have an emissions trading system. Talks are already under way between these parties to better align their systems from a technical perspective, for instance in the manner of measuring emissions.

For one or a few sectors with high emissions and a relatively limited number of companies, a minimum price for CO2 could be agreed. These could include aviation (1.9% of global carbon emissions) and maritime transport (1.7%). These sectors emit relatively high levels of carbon compared to their size. As aviation and maritime transport tend to involve multiple countries, coordination of taxation is also more obvious here. Moreover, both sectors are relatively easy to tax, partly because the vast majority of carbon emissions are produced by a limited number of companies. A more ambitious agreement could concern the electricity or industrial sectors. Such agreements would be far more intrusive and complex, and are therefore less realistic in the short term.

No easy, but necessary choices

None of the above options is simple. They all include important challenges. Firstly, countries must trust each other that the carbon price will be fully implemented and that implementation is properly regulated. Secondly, there is still a big difference between the costs of reducing carbon emissions in different countries. Countries that have already considerably reduced carbon emissions will only have more expensive options, and the same price will have less effect there. Thirdly, there are also large differences in climate ambition between countries: some countries want to reduce emissions much faster than others.

However, better global pricing of carbon emissions would be a major step towards achieving the climate goals. DNB therefore urges the Netherlands to strive for the best attainable result in carbon pricing. An agreement between the largest economies would have the most impact, but a sectoral agreement may be simpler and therefore more feasible. Restitution of funds through general tax rebates can help to create support for these agreements. Each of these solutions requires improved international cooperation and coordination. The G20 could play an important role in this, but possibly also the OECD, if coordination in a G20 context is not yet possible. The Netherlands should take the lead, as our country has previously done for European carbon pricing.