Inflation measurement problems due to unobservable prices are over

The inflation measurement problems due to the fact that no prices for certain categories of goods and services could not be observed as a result of the coronavirus pandemic, are now over. On average, items for which prices could not be measured but had to be estimated show a much higher inflation rate.

Limited measurement problems in the Netherlands

The coronavirus pandemic has affected inflation in several ways. In particular the measures taken to contain the virus caused measurement problems in the statistical offices. In April, no prices could be observed in the HICP index for 13% of goods and services in the Netherlands. This mainly concerned the prices for services such as airline tickets, hospitality and cultural services and hairdressers. In many other countries, the percentage of unobserved prices was much higher. Many shops were closed in France, Italy and Spain, which meant that prices for clothing and shoes could not be properly recorded. For the euro area as a whole, 32% of prices had to be estimated in April. This was usually done by applying the 2019 April price trend also to 2020, or by keeping prices at the same level. In June and July the situation improved, and only 1% of the prices for the products in the HICP basket had to be estimated in the Netherlands.

Corona has also changed the composition of consumption. For example, much of the consumption in the hospitality industry fell away as more people enjoyed their meals at home instead of in a restaurant and the number of international travels fell sharply. As agreed at European level, the weights of the various goods and services in the HICP are only adjusted once a year. Therefore, the weights used for the HICP do not reflect the changed consumption pattern.

The inflation rate for items with estimated prices has been significantly higher in recent months than that for items whose prices could be measured. For example, in April and May, estimated prices were about 3% higher than a year earlier, while measured prices had risen by less than 1% (Figure 1). In June, July and August the differences were even greater, but the contribution to headline inflation was small because the number of estimated items had dropped sharply (Figure 2). In July and August only the prices for cultural services such as theatres, concerts and festivals were still lacking. As of July, the prices for other goods and services could be observed again. The fact that this did not result in lower inflation in July demonstrates that the estimated prices did not vary significantly from observed prices, despite the high inflation rate for these items. In statistical terms, the high inflation rate for items with estimated prices is due to price levels in March 2020 and price developments in 2019, since that is how these prices were estimated. Consequently, they show a structurally different pattern. The price increases in categories where prices could not be observed, i.e. recreation, cultural services and airline tickets, have been around 1.5 percentage points higher than general inflation rates in recent years. The differences shown in Figure 1 reflect this trend. 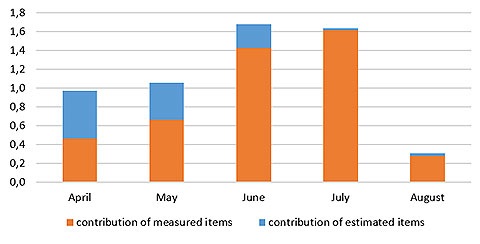