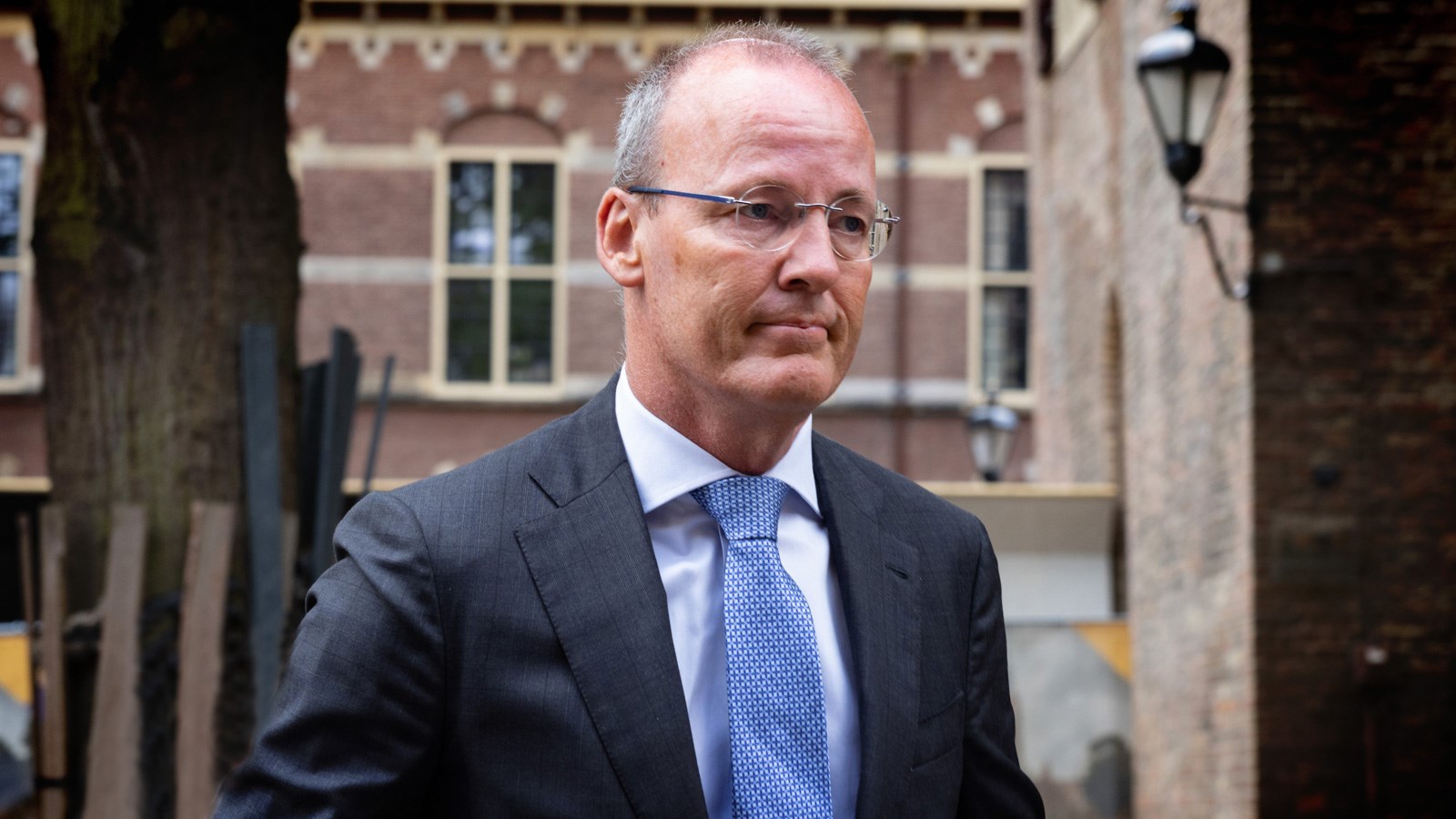 What has caused the recent sharp rise in inflation, and where is it heading? And what is the European Central Bank doing to bring inflation back to the 2% target? DNB President Klaas Knot answered these and other questions in a meeting with a parliamentary committee on Thursday afternoon. See below for his introductory remarks.

What are the factors behind the current rapidly rising inflation?

We are coming out of a lengthy period of low inflation. Between 2011 and mid-2021, euro area inflation averaged 1.2%, which is below the ECB's price stability target of 2%. The ECB's monetary policy was therefore very accommodative for a long time, with the additional aim of preventing self-reinforcing effects via falling inflation expectations and deflation.

Inflation subsequently rose sharply for various reasons. Starting in the first half of 2021, COVID-19 lockdowns led to shortages of manufacturing resources such as computer chips along with higher costs for container transport. This resulted in price hikes that also hit consumers directly starting in the summer of 2021. Energy prices began to rise in late 2021. Inflation was boosted further when the economy reopened in early 2022, with demand for goods and especially services recovering strongly and outpacing supply. Russia's invasion of Ukraine then caused natural gas prices in Europe to skyrocket and food prices to soar. These factors came in rapid succession and persisted for longer than anticipated. Consequently, inflation has now been high for longer and has gradually spread from energy to food, industrial goods and services.

Inflation in the Netherlands has now reached 16.8% (in the euro area: 10.6%) in October. The price increases of energy and food are the most remarkable. More than two thirds of harmonised HICP inflation can be ascribed to energy and food. Expressed in percentages: of the 16.8% HICP inflation in the Netherlands, almost 12 percentage points are accounted for by energy (9.7 points) and food (2.2 points). 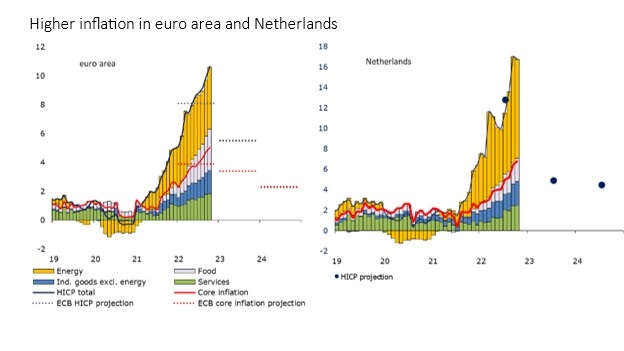 Where do we see inflation going?

The exceptional economic circumstances are creating great uncertainty about the future path of inflation. ECB projections call for euro area inflation to remain high in 2023, only approaching levels near 2% in 2024. Related upside risks are linked to Russian gas supplies and European demand for gas both this winter and in the winter of 2023-24. The profound influence of energy prices means that the central bank has difficulty controlling current inflation. Wage growth along with the increase in the minimum wage also pose an inflationary risk. One-off wage hikes are logical in the face of high inflation, but automatic wage indexation will make it all the more difficult to bring inflation down. Finally, prolonged expansionary fiscal policy can boost inflation further. Efforts to curb inflation are helped when fiscal policy works in the same direction as  monetary policy.

Economic growth in the third quarter of this year was -0.2% in the Netherlands and +0.2% in the euro area (quarter-on-quarter). DNB will issue new projections in December. It is quite possible that we will also experience economic contraction in the coming quarters. Some cooling off of the economy is needed to reduce inflationary pressures. However, it is far from certain that a mild recession will be enough to curb high inflation.

What is the ECB doing about this?

The ECB is taking unprecedented measures to restore price stability. The ECB embarked on the course of normalisation in December 2021. At the time, inflation was already above target but was still expected to fall below 2% again in the medium term. The war in Ukraine and broadening inflationary pressures prompted the ECB to accelerate monetary policy normalisation. Net asset purchases have since ceased (the Pandemic Emergency Purchase Programme (PEPP) in March and the Asset Purchase Programme (APP) in July) and the ECB has raised policy rates three times. The two most recent rate hikes (of 0.75 percentage points) were the ECB's largest rate hikes ever. Monetary policy is expected to tighten even more in the coming months, thus raising interest rates further beyond neutral levels. 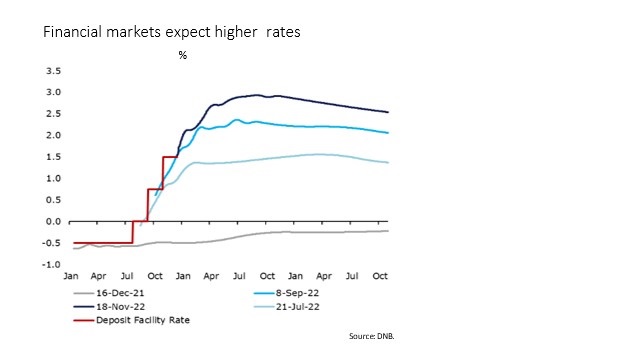 Current monetary policy is geared towards curbing demand, thus keeping inflation expectations anchored. The ECB is using higher interest rates to bring demand in line with more limited supply, thus creating a balance that will contribute to price stability. The rapid pace at which interest rates have been raised is linked to the pace at which inflation has increased and underlines the ECB's commitment to price stability in line with its mandate. The ECB will continue to tighten its policy until the medium-term outlook for inflation – a broader concept than just model projections – returns to target.

Monetary policy in 2022 is about more than just policy interest rates: the balance sheet of the Eurosystem will also be examined. To mitigate the risk of deflation or another financial crisis during the pandemic, the ECB purchased bonds on a broad scale and provided loans to banks under favourable conditions in recent years. With monetary policy being tightened, these instruments are also being adjusted. Conditions for TLTRO loans were recently tightened, and in December we will discuss the scale-down of the bond portfolio that we plan to start next year.

At the same time, the ECB can use the Transmission Protection Instrument (TPI) to prevent disruption to the smooth transmission of its policies in the euro area. The ECB Governing Council can activate the TPI and temporarily resume bond purchases if it identifies disorderly market conditions while fiscal policy still meets all agreed conditions. There has thus far been no need to deploy the instrument.

How does this affect DNB's balance sheet and profitability?

Monetary tightening will lead to expected losses for DNB (as explained in my letter to the Minister of Finance on DNB's capital position, dated 9 September 2022). We will absorb losses by drawing on our buffers and our provision for financial risks. It is worth noting in this regard that central banks outside the euro area, even those with a different monetary strategy, are also expecting significant losses due to current market developments.

DNB's loss should be seen in broader perspective. Making a profit or loss is inherent to the conduct of our tasks as a central bank. The expected losses stem from monetary measures that have produced major public benefits. For example, our shareholder, the Dutch State, benefited from savings on interest payments estimated at EUR 28 billion between 2015 and 2021, which is significantly more than the profit distributions that are expected to fall by the wayside in the coming years.

The effects of monetary tightening are visible in sharply higher bond yields and mortgage lending rates, which leads to higher financing rates for households and businesses. 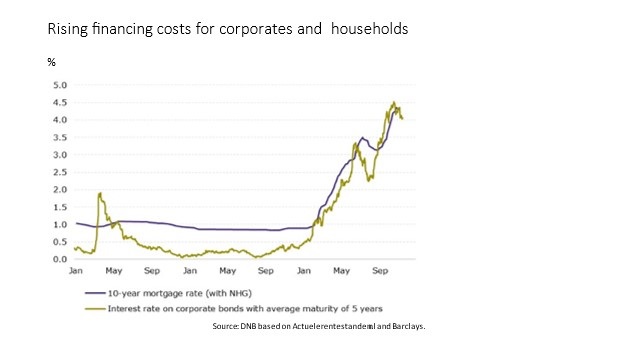 The relatively high level of household debt in the Netherlands is a vulnerability. Financial risks may materialise if outstanding debts need to be refinanced or if house prices fall.

There are clear signs of a turnaround in the housing market. Some cooling in the overheated market is desirable, but a fall in house prices could have negative macroeconomic effects as consumption declines.

The financial position of homeowners is healthier than prior to the 2008 financial crisis. Among other factors, mortgage debt repayments have reduced the average loan-to-value ratio. As a result, households are generally less likely to go into negative equity ("under water") if house prices fall. (Financial Stability Report, – autumn 2022). In addition, many households have taken advantage of the low interest rate environment to lock in a long fixed-interest period, meaning most of them will be able to weather a potential negative equity situation for just as long.

The Dutch public debt-to-GDP ratio is developing favourably, but it is important to restore fiscal discipline. As mentioned earlier, large-scale and generic fiscal policy can lead to higher inflation, higher interest rates and higher public debt.

High public debt in some Southern European member states poses a risk, although even here the impact of rising interest rates on public finances is cushioned by the fact that public debt is financed on a long-term basis. If economic growth weakens, doubts about debt sustainability in countries with high debt-to-GDP ratios could resurface.