To limit global warming to below 2 degrees Celsius, we need to accelerate the transition to a climate-neutral economy. Better pricing of carbon emissions is essential for this: more polluters must pay for their carbon emissions, and they must pay more.

The transition to a climate-neutral economy is too slow. The main reason for this is that polluters still pay too little for the costs of their carbon emissions to society. Consequently, companies and people worldwide have few financial incentives to switch to more sustainable business models and reduce their emissions. Carbon pricing could be a solution. If governments introduce this, emitters will pay for their impact on the climate. And they will switch more quickly to green alternatives.

Why is DNB involved with carbon pricing?

At De Nederlandsche Bank (DNB) we are committed to safeguarding the stability of the Dutch economy and the financial sector. Climate change poses threats to both. For one thing, the likelihood of natural disasters has increased, which may disrupt our economy. Also, if we keep postponing the transition to green energy, we may end up having to do so very abruptly. This could also severely disrupt our economy. and that is why we examine such subjects as the energy transition and carbon pricing and advise the government.

Carbon pricing – the state of play

The good news is carbon pricing is increasingly applied all around the globe. According to the World Bank, priced emissions accounted for just over 20 % of emissions in 2021. This was 15% in 2020 and 5% in 2010. But most emissions are not yet subject to pricing. Where they are, prices are often too low. The World Bank has stated that the price should now be between $40 and $80 per tonne of carbon emissions in order to comply with the Paris Climate Agreement. But prices are below $40 in the vast majority of cases. 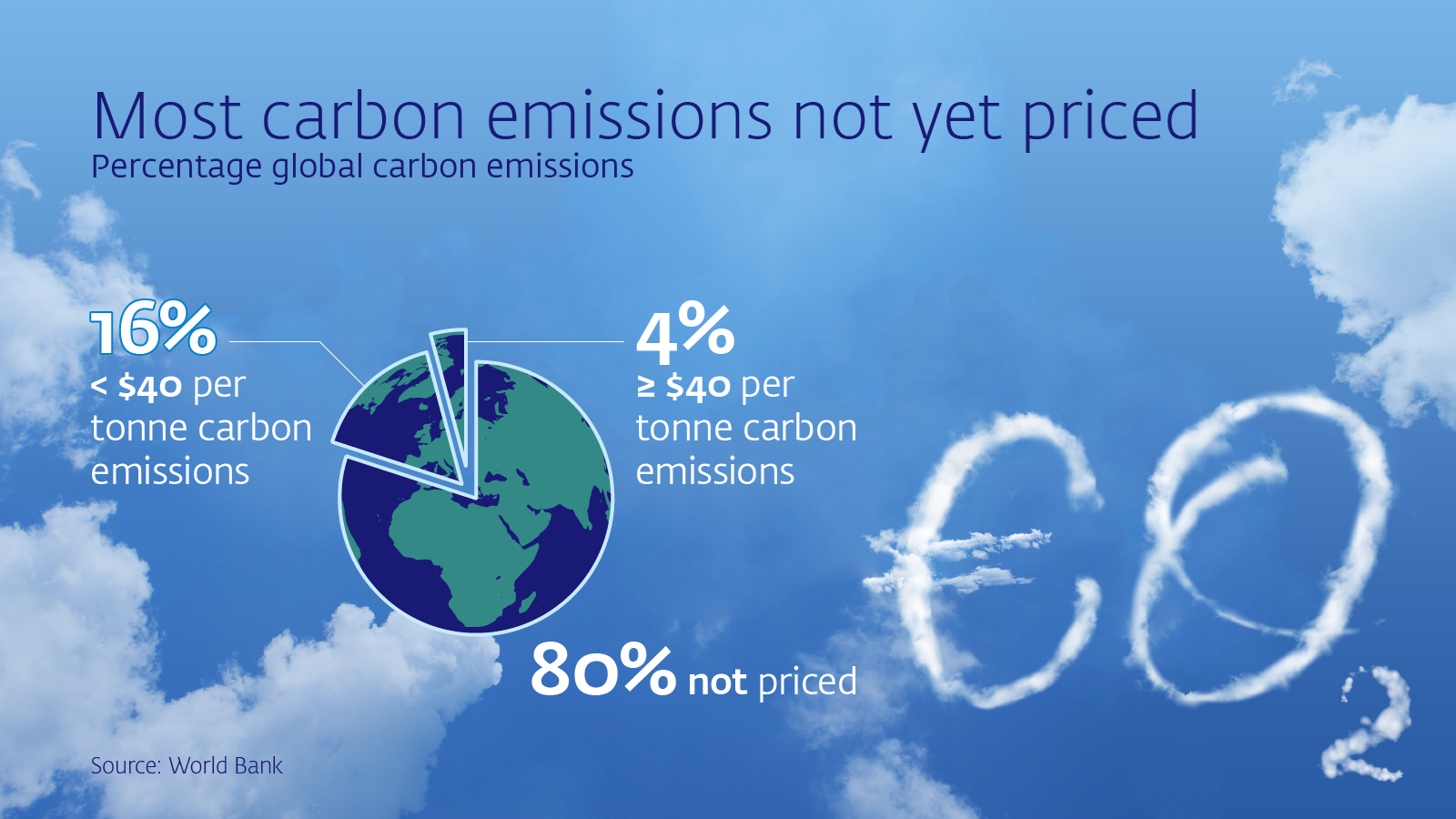 What needs to be done

At DNB we advocate better pricing of carbon emissions. This means putting a price tag on more emissions, and raising prices. Governments can do this in different ways, by imposing a carbon tax or by operating an emissions trading system (ETS). This is a system whereby companies must buy credits to be allowed to emit carbon.  Companies can then trade these credits.

Who should regulate carbon pricing?

Carbon pricing should preferably be coordinated at global level. This is to protect the competitive position of countries and to prevent polluters from transferring their emissions to other countries. It would be ideal if companies in each country paid the same amount for their emissions. But if this is not feasible, there are several interim solutions. For example, the largest economies could agree on a minimum price. At DNB, we believe that the Netherlands should push for such solutions.

Much can also be achieved at European level. In July 2021, the European Commission (EC) presented a comprehensive set of proposals for reducing greenhouse gas emissions by at least 55% by 2030, compared to 1990 levels. Carbon pricing is an important element in the proposals. Currently, only certain businesses in the energy and heavy industry sector in the EU pay for their carbon emissions. They do so under the European ETS. Besides improving the ETS, the EC proposes introducing a wider-scoped trading system that also covers such sectors as road transport and buildings. A system of carbon certificates should apply at the EU's external borders, which importers of electricity, steel and cement must buy. At DNB we welcome these opportune proposals. It is important, however, that they are not excessively watered down under pressure from individual Member States.

Limited impact on the economy

At DNB, we studied the impact of improved carbon pricing on our economy. This study shows that subjecting the manufacturing, energy and transport sectors to an EU-wide tax of €50 per tonne of carbon emitted will only have a limited impact on the competitive positions of the Netherlands and most other EU Member States. One of our previous studies showed that expanding and increasing carbon pricing will not have a major impact on the Dutch economy as a whole.