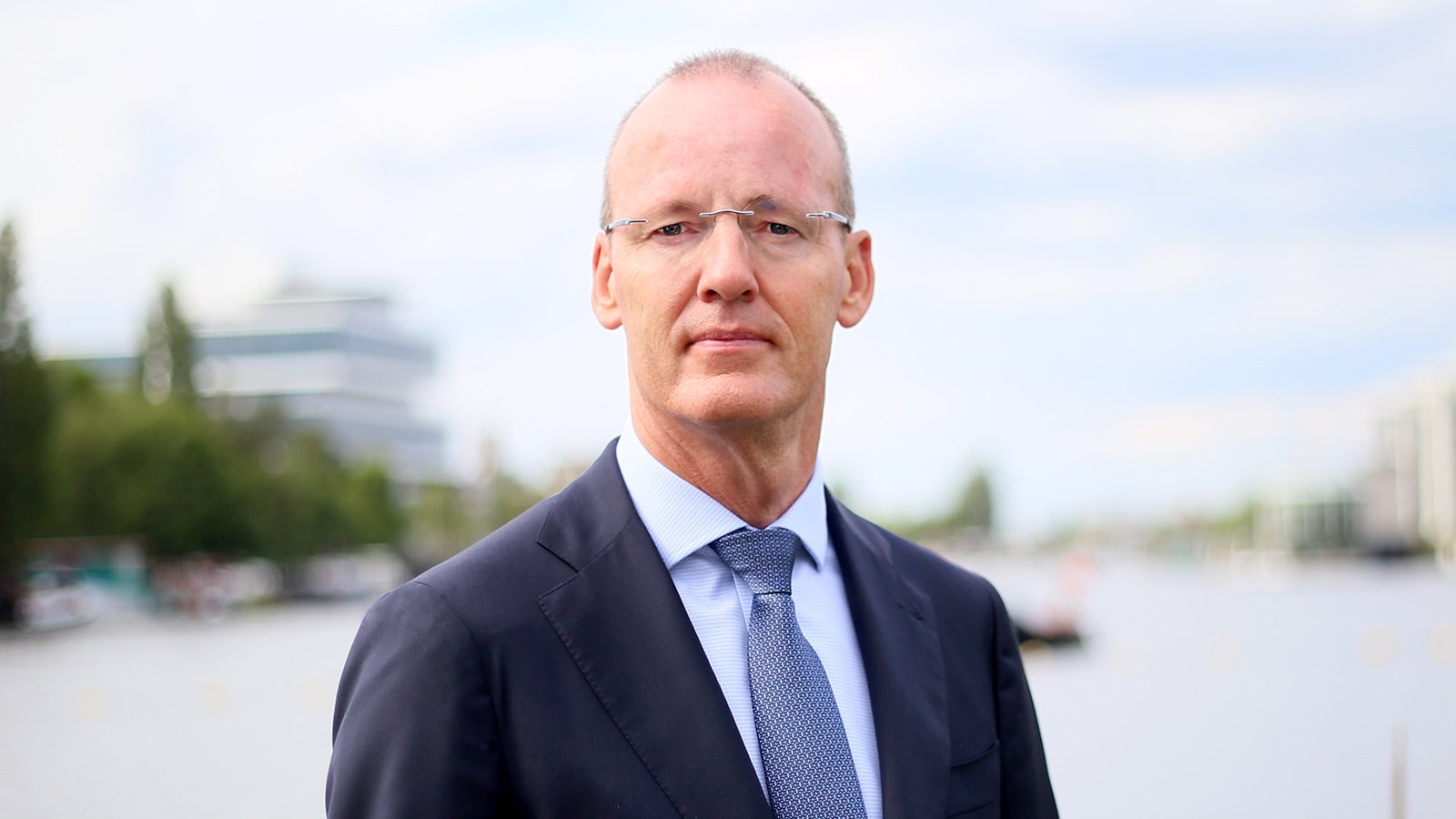 Now is the time for Europe to meet the challenges beyond Covid and to rebuild economic and financial resilience. With reforms and investments that support sustainable growth, by reviewing the Stability and Growth Pact, completing the Banking Union, building a Capital Markets Union, and implementing Basel III. That is the main message that Klaas Knot delivered today at the Eurofi High Level Forum in Ljubljana today.

Thank you Didier. It’s always a pleasure to speak at Eurofi. Especially today. It is great to see all of you in person again, in the beautiful, ancient city of Ljubljana.

At our last Eurofi meeting five months ago, the situation was still different. Then, I compared the European economy with a patient recovering from a serious accident. I mentioned three phases: the emergency phase, the recovery phase, and the rehabilitation phase: that is to say, rebuilding resilience. Given the circumstances at that time, I focused on the first two phases.

Since then, the economic outlook for Europe has brightened. In most European countries, economic activity is expected to return to pre-Covid levels in the second half of this year.

So now that the patient is recovering, and is slowly getting ready to leave hospital, it is time to look ahead. That’s why today I want to focus on the third phase: rebuilding the patient’s resilience. The resilience to cope with possible future crises and challenges. For example, the coronavirus is not going away anytime soon. It may never completely do so, and our economy may have to adapt to seasonal flu-like patterns. And then there is perhaps the greatest threat to financial stability of all: climate change. The latest IPCC report once more underlined the urgency of this threat.

When I look at the European economy today, I see that the patient’s charts have improved. But I also see some serious underlying vulnerabilities. Yes, Europe handled the immediate economic fall-out of the Covid crisis pretty well. And yes, we now see the fruits of this in the economic data. But let’s not fool ourselves. Even before the pandemic, the European economy faced some important structural vulnerabilities. And Covid did not make them go away. On the contrary. The recent crisis highlighted these issues and in some cases exacerbated them.

One of these vulnerabilities is our heavy reliance on debt. Public debt was already high before Covid, and has increased strongly since then, as you can see here. 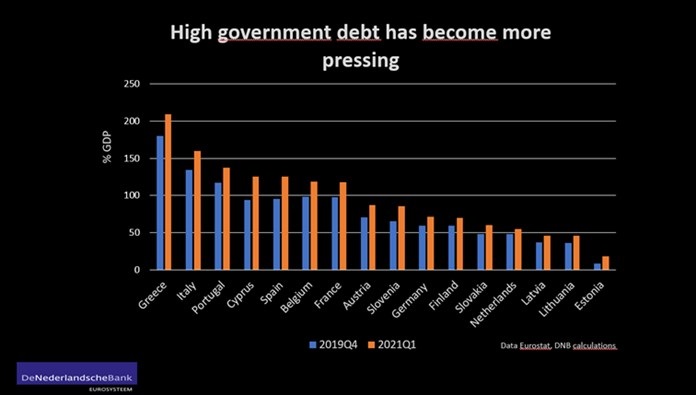 Of course, European government were absolutely right to use deficit spending policies to shield their economies from the worst effects of the lockdown.

But at the same time, it poses new challenges. Especially in some euro area countries, rising public debt has further limited the fiscal space for governments to support their economies and build buffers against future crises.

Related to the issue of debt is the long-standing issue of diverging structural economic growth in the euro area. The European economy suffers from several structural imbalances. 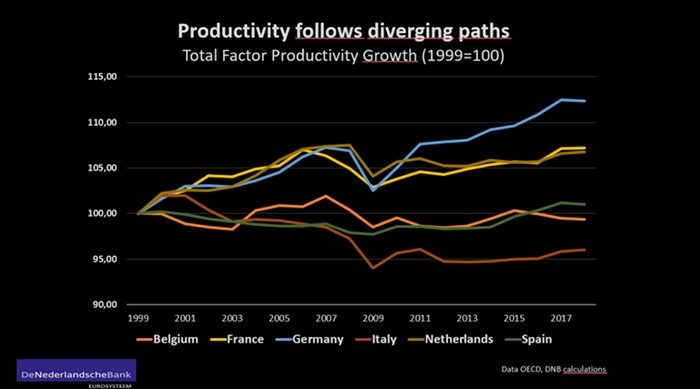 As you can see from this chart, total factor productivity in the euro area has diverged since the start of the EMU. And that has translated into diverging growth paths. Covid has worsened this problem, because some of the economies that have been growing the slowest over the past ten years, are also the ones that were hit the hardest by the Covid crisis. So our economies continue to grow apart. I am concerned about this, because in the long term it threatens the coherence of our Economic and Monetary Union. This was clearly illustrated at the start of the Covid crisis. Concerns about the economic impact of the lockdown led to doubts about the future of EMU. Resilience is about balance. And we all know that if you put more pressure on one leg than the other, you’re bound to get some serious health problems at some point. That is not what the patient needs… What the patient needs is some care to wean it from its dependence on debt and to bring back balance in economic growth.

And I would recommend building mental strength too. I used to run marathons and what I learned is that you run those 42k primarily with your head, with your brain. All the training is just to get your body to follow…. The brain of our economy is our financial system. Through its central role in allocating resources, spreading risk and storing wealth, it has an enormous influence on our daily economic processes. Looking at the state of this brain, of the financial system that is, there is room to improve our mental shape.

In Europe, we still have unfinished business. Completing the Banking Union, building the Capital Markets Union, and implementing Basel III. These are more than just nice to have. For one thing, our toolbox to prevent, and if necessary deal with, a future European banking crisis is still not complete. This time we were lucky, because our banking system has been able to withstand the Covid shock pretty well. But that may not be the case next time. And as long as European capital markets remain fragmented, the bias towards bank-based debt financing remains, and the European economy remains too dependent on the fortunes of its banking system, and opportunities for generating venture capital are missed. Capital that we sorely need to fund the green transition, for example.

At global level, the turmoil in financial markets in March last year exposed vulnerabilities in our non-bank financial system. Especially money market funds and open-end funds. Over time it seems investors came to regard investments in these funds to be equal to cash or bank deposits in terms of liquidity and security. Indeed, since 2008, non-bank financial intermediation, or NBFI, has grown much faster than bank intermediation. It now accounts for about half of all financial assets worldwide. 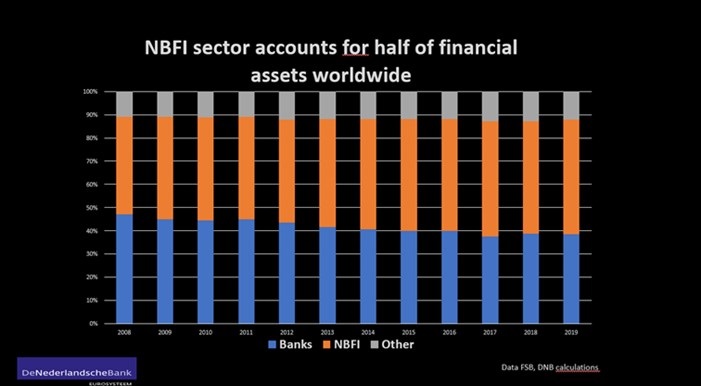 So, whereas in the aftermath of the previous crisis the emphasis was very much on the banks, we now have some catching up to do when it comes to reducing systemic risk in non-bank financial markets.

So, we know what ails the patient. Now it is time to make a treatment plan to strengthen resilience.

First we treat rising debt and diverging growth in the euro area. I take these two vulnerabilities together because I believe the answer to both problems is the same: to strengthen the structural growth capacity of the euro economies. Higher potential economic growth ultimately generates the capacity to repay debt and it helps to reduce the productivity gap between member states. In other words: the patient needs to become more active.

The question then is: how to strengthen structural economic growth? Here we need two things: economic reform and public investment.

When it comes to economic reform, the key thing here is that all member states must play their part. Weaker economies need to implement reforms that increase their productivity and competitiveness. This is good for exports, for economic growth, for employment, and for public debt. These reforms are more likely to succeed if the stronger economies also do their fair share. For these stronger economies, that means implementing reforms that give households more room to spend, so that they can boost imports and reduce their trade surpluses. This will not only help the weaker economies, but also benefit the stronger ones.

Now when it comes to public investment, not all countries in Europe have the same fiscal space to invest in their economies. Next Generation EU is therefore very important. By relieving national budgets, it enables countries to modernize their economies on a much larger scale than would otherwise have been possible. That includes digitalization and becoming carbon-neutral. It can act as a catalyst for economic reform and private investment. If we succeed in making Next Generation EU work, all countries in the European Union stand to gain.

By reforming and investing we can hopefully stop a further divergence of the European economies and start the process of re-finding our balance.

To support balanced economic growth, we will also have to take a closer look at the Stability and Growth Pact. Policymakers in Europe responded to the Covid crisis by activating the general escape clause. By temporarily lifting all restrictions, governments gained fiscal policy flexibility to do what was needed to support firms and households. That was a wise decision. And we may very well need the general escape clause in the face of another extreme event in the future. But a suspension of all fiscal rules should not be our only tool to achieve a balanced policy mix to deal with economic shocks. To me it showed that the Stability and Growth Pact needs more built-in room for countercyclical fiscal policy. To ensure the rules do not cut short much needed public investment, worsen economic downturns and increase economic divergence between member states. This is even more important in the current low interest rate environment, where, in the vicinity of the effective lower bound, central banks have limited room for maneuver.

Countercyclical fiscal policy is a two-way street: fiscal expansion to support the economy in bad times is only possible if we build buffers in good times. A more countercyclical fiscal framework should therefore have robust and credible rules that ensure national governments keep their debt levels in check. And not only should member states build up buffers in good times. They should also increase potential economic growth that ultimately bolsters debt repayment capacity. So, as we allow for more fiscal flexibility, limiting the level of debt will have to play a bigger role as an anchor for fiscal prudence.

All in all, the Stability and Growth Pact has served an important purpose over the past 20 years and it continues to do so. Therefore we need to review it in the light of the changed economic circumstances.

Time for the shrink, time to balance the mind, time to strengthen the financial system.

At European level, to strengthen the financial system we need to move forward with completing the Banking Union. We need to make significant steps in building the Capital Markets Union. And we should resume the European implementation of the Basel III reforms.

On a global scale, vulnerabilities in parts of the NBFI sector need to be addressed with priority, keeping momentum and ambition in the work underway. Financial institutions, both banks and non-banks, need buffers to absorb losses and liquidity shocks. Regulation needs flexibility in order to allow institutions to use these buffers. And the system needs safety valves, like margining, to prevent too much risk pressure being built up. It is important to advance the comprehensive work program the FSB has developed to enhance the resilience of the NBFI sector while preserving its benefits.

Once, when I was running a marathon I saw another runner with this text on his T-shirt: "Anyone can run a hundred meters, it's the next forty-two thousand and two hundred that count." During the covid-pandemic we ran over hundred meters, but there is still a long way to go. The biggest mistake we can now make is to think the job is done. There are just too many structural threats to the European economy and financial system we need to address. The most important work is not behind us. It’s just ahead of us. So I would say: let’s get to the finish!